Wow How Old can You still be an Altar Server? at Age 90 Leo is still Helping at Mass! SHARE 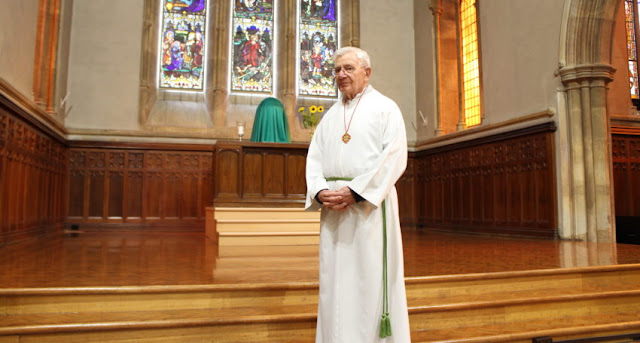 90-year-old altar server  Leo Vandenberg is the oldest altar server in the Cathedral parish, and the Archdiocese – and possibly Australia. He serves at lunchtime Mass Monday to Wednesday, the Benediction and lunchtime Mass on Fridays, and then at both 6pm Masses on weekends. His commitment to the parish over the years has also included coordinating the extraordinary ministers, readers and collectors and he has been a regular volunteer at diocesan events.
Jennifer, his wife of 45 years, is also active in parish life. Born in the Hague, Netherlands, in 1928, the eldest of five children to “staunch Catholic parents”, Leo recalled the hardships of growing up during the war years and the importance his faith played from a young age. “I was baptised, did my first communion and was confirmed in the parish church of The Hague called St Agnes. During the war years that church was packed to capacity at every Mass with people praying for peace,” he said. “The worst time was the winter of 1944/45 when there was no food and no electricity – can you picture a church with no electricity? Indeed, can you imagine living without electricity and no mobile phones? “We had to use candles… at that time I was in the choir and I remember we had to learn off by heart all the songs in the Christmas Mass because we had no lights and we couldn’t read the words.”
He and his first wife Teresa (who passed away in 1954) boarded a boat and after a six-week journey migrated to Australia in 1952. He was a locomotive driver, staying there on and off until his retirement. Leo became an altar server at St Francis Xavier’s Cathedral when he retired 25 years ago. In 2015, the Vandenbergs each received an Archbishop’s Award for service to parish life. While he did consider the priesthood earlier in his life, it was at St Agnes Youth Ministry he met his first wife.
“I could go to Mass three times a day and I’d never get bored with it,” he said. As for the future, Leo said his life is in God’s hands and he will just continue to live by his motto of taking “each day at a time”.
Edited from thesoutherncross.org.au/

SHARE this Story to INSPIRE others to give their All to God and His CHURCH!