#BreakingNews 2 Scandinavian Woman Killed by ISIS while Backpacking in Morocco 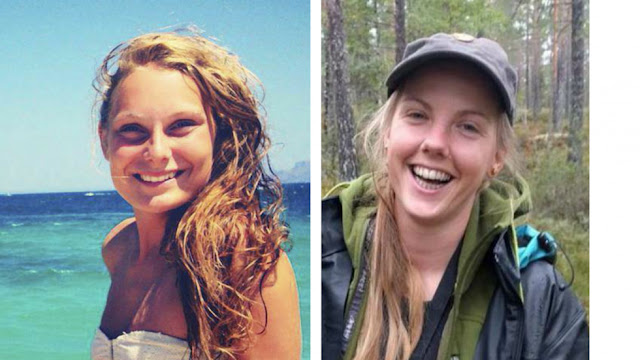 Two Scandinavian women; Maren Ueland, left, and Louisa Vesterager Jespersen were found dead in a popular tourist area  of Morocco, in African. A video has surfaced on social media showing the murder of one of two women killed in Morocco. The bodies of university students Maren Ueland and Louisa Vesterager Jespersen were found on Monday, December 17, 2018 in their tent in the Atlas mountains. ISIS members have claimed responsibility in the video where the men claim the murders were in revenge for events in Syria. Four men have been arrested this week. Also, nine further arrests were made  for "suspected links to the perpetrators of the terrorist act". The women's bodies were flown from the Moroccan city to Denmark.
Louisa Jespersen,  was 24 and from Denmark, and 28-year-old Norwegian Maren Ueland had been studying at the University of Southeastern Norway. They were on a month-long holiday in Morocco since the 9th of December. They travelled to Mount Toubkal, North Africa's highest peak, near the tourist village of Imlil, south of Marrakesh. Ms Ueland's mother said the women had taken full precautions ahead of their trip.
A video  showing the beheading of one of the women was shared on social media by supporters of Islamic State.  In the video, the killer says: "This is in revenge for our brothers in Hajin," . Moroccan authorities have said that the four men in detention are the same men who appeared in the second video.