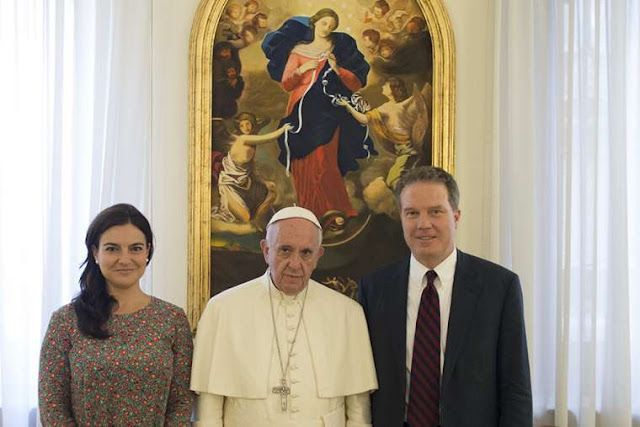 FULL TEXT Release from Vatican.va
Resignation of the Director and Deputy Director of the Holy See Press Office and appointment of the interim Director

The Holy Father Francis accepted the resignation of the Director and Deputy Director of the Holy See Press Office, Dr. Greg Burke and Dr. Paloma García Ovejero, and appointed Alessandro Gisotti as interim Director of the Holy See Press Office. , until now Coordinator of Social Media of the Communication Department.
***********
Burke, 59, a former Rome-based reporter for Fox News, joined the Vatican in 2012.
Greg Burke tweeted: “The experience has been fascinating, to say the least. Thank you, Pope Francis.” He also goes on to say, “At this time of transition in Vatican communications, we think it’s best the Holy Father is completely free to assemble a new team.”
Ovejero, 43, a former reporter for the Spanish radio network COPE.  Dr. Paloma García Ovejero tweeted in Spanish translated to: “Ending a chapter. Thank you, Holy Father, for these two and a half years! Thank you, Greg, for your trust, your patience and your example.”