Pope Francis "In your profession you can be "living channels" of spirituality to God and to all...." FULL TEXT 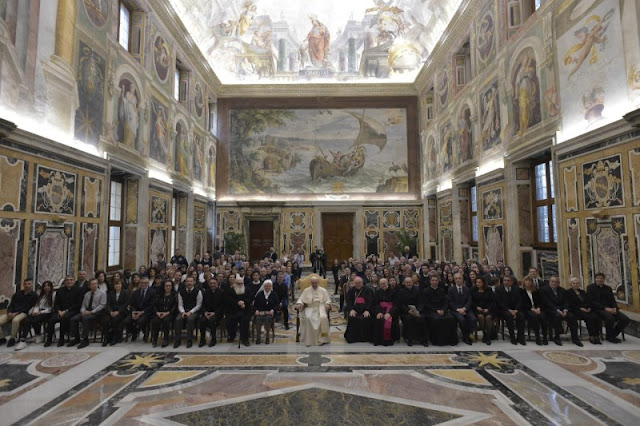 I greet you with affection and I thank Don Guido Todeschini for his introductory words. Telepace has just concluded the initiatives on the occasion of its fortieth anniversary. It was a year of special gratitude to God and reflection on your professional service. In fact, even the tools of communication are a gift from God: they "have entailed a broadening of horizons for many people. This is a gift from God, and it is also a great responsibility. I like to define this power of communication as "proximity". [...] A proximity that takes care, comforts, heals, accompanies and celebrates "(Message for the 50th World Communications Day, January 24, 2016).

Telepace has always stood out for its vocation to "proximity" and for its authentic service "to God and to man in the Church", as your motto reads. It is in this context that the choice should be read, from the beginning, not to accept any kind of advertising and to live only free offers. As for the first Christians, there is a total entrustment to Providence, which rests on Jesus' invitation: "Seek first of all the kingdom of God and his justice, and all these things will be given to you in addition" (Mt 6 , 33).

Telepace was born small and limited to a few Italian provinces, with a precise objective: to be the voice of those who have no voice. I encourage you to continue to pursue it. Especially in the current time, in which the culture of waste leaves voiced more and more people. In 1990, at the wish of St. John Paul II, the Rome office was opened: the Wednesday audience, the Angelus, the Rosary and the Pope's celebrations arrive fully and directly in each house. A great relationship of relationship and affection with the See of Peter, which is also linked to the "Cenacolo Maria Stella dell'Evangelizzazione".

I am therefore happy to share this moment of celebration for your anniversary. It is not an end in itself, but an opportunity to renew the commitment taken forty years ago. For this, I would like to briefly entrust you with three commitments.

The first: to be antennas of spirituality. The image of the antenna is always beautiful and eloquent in its dual function of emitting and receiving a signal. Telepace, as a radio and television channel, is an expert in this communication process. It is up to you to know how to recognize the spiritual signs of the Father's merciful love in everything that happens. "Even today it is the Spirit who sows in us the desire of the Kingdom, through many living" channels ", through the people who allow themselves to be led by the Good News in the midst of the drama of history" (Message for the 51st World Communications Day, 24 January 2017). In your profession you can be "living channels" of spirituality to God and to all your listeners and viewers. Above all the poor, the last, the excluded. Never forget them, the poor next door! Continue to stand next to prisoners, condemned to death - this is bad, but still there is the death penalty - as when you went to the death row in Texas, where you accompanied and attended the gallows two young people, after having them comforted with the Sacraments. It is the spirituality of charity!

Second commitment: to educate young people in the school of the Gospel. One of the issues that emerged in the recent Synodal Assembly, dedicated to young people, concerns precisely their relationship with the Church. In the Final Document we read: "All young people, no one excluded, are in the heart of God and therefore also in the heart of the Church. However, we recognize frankly that this affirmation that resonates on our lips is not always a real expression in our pastoral action [...]. Yet the Gospel asks us to dare and we want to do it without presumption and without proselytizing, bearing witness to the love of the Lord and holding out his hand to all the young people of the world "(No. 117). How I would like the media to pay more attention to young people, not only by telling their failures but also their dreams and their hopes! The Gospel of joy calls us to an educational commitment that can no longer be postponed. Educating young people in the school of the Gospel means, above all, being witnesses of the only Word that saves. Your communication is outgoing, to engage in dialogue and, even before, to listen to young people. Let us remember: the Gospel asks to dare!

Third: Being storytellers who do not fall into gossip. Communication is not just transmission of news: it is availability, mutual enrichment, relationship. Unfortunately, a form of communication that has nothing to do with attention to one another and with mutual understanding continues to be widespread: it is gossip. It is a malpractice that every day undermines the human community, sowing envy, jealousy and lust for power. You can even kill a person with this weapon, either by grasping it, or by building gossip, or by passing it by hand, when listening to it, prolonging life to lie and delation. It is important, therefore, to communicate responsibly, also thinking about how bad you can do with the language, with the chatter, with the gossip. I renew, then, the invitation to "promote a journalism of peace, [...] a journalism made by people for people, and which is understood as a service to all people, especially those - are in the world the majority - who do not they have a voice, [...] a journalism committed to indicate alternative solutions to the escalation of clamor and verbal violence »(Message for the 52nd World Communications Day, 24 January 2018).

May the Lord help you never to betray the goal you carry in the name: Tele-pace. To always be a television of peace, which is a gift from God and is humble and constant conquest of humanity. Your logo is the dove that carries an olive branch in its beak. I wish you every day to be doves of peace and to fly in the ether with the two wings of prayer and charity.

Dear friends, in a few days we will live Christmas. Let us prepare ourselves for this great Mystery in silence: let the Child speak; let us leave his gaze, poor and helpless, penetrate our hearts and with his tenderness make us "channels" of peace. I thank you for your visit, I bless you and your families, and I ask you, please, to pray for me. Thank you!