Pope Francis "...you have the privilege of seizing the buds of a flowering of peace for all of humanity." 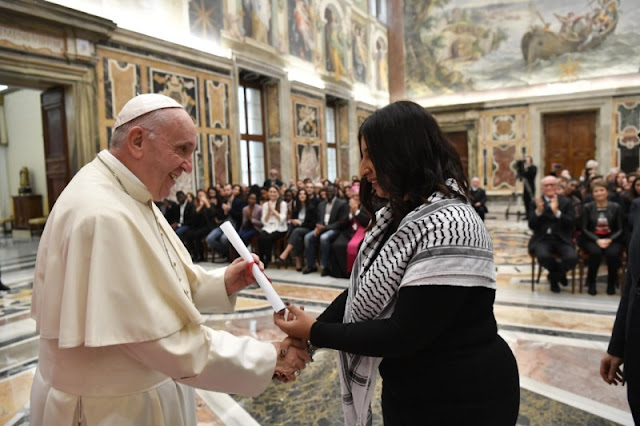 I welcome you with joy on the 20th anniversary of the Rondine - Citadel of Peace Association. I greet the President, Mr. Franco Vaccari, and I thank him for his introduction. I greet Cardinal Gualtiero Bassetti, who since the beginning has supported this reality by feeling in it the "perfume" of the venerable Giorgio La Pira, and the Archbishop of Arezzo-Cortona-Sansepolcro, Riccardo Fontana. In a special way I greet you young people, who come from countries where conflicts have degenerated into various forms of violence and war, and that you live in Rondine the experience of the International Student House. And you, guys from all the Italian regions, with your teachers of the Fourth Year School. And you too, former students, members, supporters and friends. Welcome!

Your educational commitment is to host young people who, in various parts of the world, live stuck in cultures poisoned by pain and hatred and offer them a bold challenge: to verify in person if the other, he or she who is beyond a closed boundary, of reticulates or impassable walls, is really what everyone claims: an enemy. In these twenty years you have developed a method capable of transforming conflicts, getting young people out of this deception and giving them back to their peoples for a full spiritual, moral, cultural and civil development: generous young people who, innocent, are born with weight of the failures of previous generations.

You have founded this work on two great spiritual roots of your land: Saint Francis of Assisi, stigmatized in La Verna, and Saint Romualdo, founder of Camaldoli. You have chosen well!

I, too, when I chose the name of Francis, I thought of the poor and of peace. Poverty - in the negative sense - and the war are linked in a vicious circle that kills people, fuels untold suffering and spreads a hatred that does not stop. By choosing to dedicate yourselves to young people, you also commit yourselves to fighting poverty and building peace, as a work of justice and love. An action that nourishes hope and places trust in man, especially in young people.

La Pira wrote that La Verna is "the launching pad for peace enterprises". On that mountain there is a mystery of pain and transfiguring love and you, who have elaborated the Rondine Method for the creative transformation of conflicts, up there receive continuous inspiration to progress in the service of the common good. And so you have the privilege of seizing the buds of a flowering of peace for all of humanity.

I have listened to the appeal that you have written and which you will present at the UN on 10 December, on the occasion of the 70th anniversary of the Universal Declaration of Human Rights. Listening to a young Palestinian and a young Israeli who together ask the governments of the world to take a step that can reopen the future, transferring the cost of a weapon from the defense budget to the budget of education to form a peace leader, is a rare thing, it's a bright thing! How could you disagree? But we adults can not get away with a "good guys!", No. I feel I have to give you all my support, my sympathy and my blessing.

In fact, your appeal contains and proposes a concrete vision. In the Message for the next World Day of Peace, on 1 January 2019, which has as its theme Good politics is at the service of peace, I reiterate that political responsibility belongs to every citizen, in particular to those who have received the mandate to protect and to rule. This mission consists in safeguarding the law and encouraging dialogue between the actors of society, between generations and between cultures. Listening to you I add: between the parties in conflict. Because trust is created only in dialogue.

When the human being is respected in his fundamental rights - as Saint John XXIII recalled in his Encyclical Pacem in Terris (1963) - the sense of the duty to respect the rights of others sprouts in him. The rights and duties increase the awareness of belonging to the same community, with others and with God (cf. ibid., 45). We are therefore called to bring and announce peace as the good news of a future where every living being will be considered in his dignity and his rights.

You, dear young people, have chosen to meet you when everything around you and inside you said: why? What is it for? Will it be right? And, after the two years of formation at Rondine, you have overthrown your feelings, your thoughts, you have given rise to mutual trust and now you are ready to take professional, civil and political responsibilities for the good of your peoples. You are already those young leaders who in the appeal ask States and peoples to commit themselves to forming together!

You ask us to join your appeal. For my part, I will do it, and I ask the Heads of State and Government to do the same. Your voice - weak, but strong in the hope and courage of youth - can be heard on December 10th at the United Nations. They serve leaders with a new mentality. Those who do not know how to dialogue and confront each other are not leaders of peace: a leader who does not try to meet the "enemy", to sit with him at the table as you do, can not lead his people to peace. To do this you need humility, not arrogance: Saint Francis helps you to follow this path, with courage. Listening to young people, even in the recent Synod in which they were protagonists, I learned a lot from them. I hope your leaders come to Rondine, and see how their young people are preparing peace.

I rejoice that you have chosen the encyclical Laudato si 'as a fundamental text for your school: in fact, integral ecology offers the prospect for humanity to conceive itself as the only family and consider the Earth as a common home. It is good that with your method you want to reach citizens and political leaders, representatives of national and international institutions at the same time. Indeed, peace is the responsibility of each one. This is why, together with the Cardinal Secretary of State, you have met the Diplomatic Corps at the Holy See. With the efforts of all we must definitively remove the war from the planet and the history of humanity.

Dear friends, this twenty-year anniversary of your Association renews the momentum to spread your simple and strong testimony, your method, your desire for change in the world, which, starting from relationships, pervades every aspect of life. May you help break down the higher walls, build bridges and wipe out the impassable borders, the legacy of a world that is ending. You have overcome the hardest barriers, those within each of you, dissolving the enemy's deception, and you are amazed at yourself when you have re-opened the boundaries blocked by wars. Please do not ever lose your amazement and humility. Guard, dear young men of Rondine, the trust you have gained among you and transform it into a generous task of service to the common good. May it go on, Mr. President, the work started! For this I bless all of you, my heart, and your loved ones and I assure you of my prayer. You too, please, remember to pray for me. Thank you.