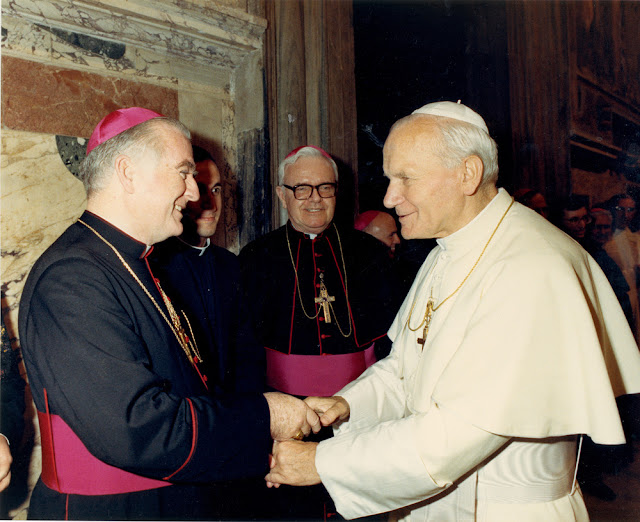 The Most Rev. Robert E. Mulvee, former Catholic bishop of Providence, died Friday at age 88 after a brief illness, as reported by the Diocese of Providence. He died at the St. Antoine Residence, an assisted-living community in North Smithfield. Bishop Emeritus of Providence.
Biography from the Diocese Website
“As One Who Serves”
February 15, 1930 - December 28, 2018

The Most Reverend Robert E. Mulvee was born February 15, 1930 in Boston, the son of the late John F. and Jennie T. Mulvee. He prepared for the priesthood at Saint Thomas Seminary in Bloomfield, Connecticut; Saint Paul Seminary at the University of Ottawa, Canada; and the American College at the University of Louvain in Belgium. He was ordained for the Diocese of Manchester, New Hampshire on June 30, 1957 at Louvain.

He served at a number of parishes in New Hampshire for several years before returning to Europe to do graduate work. In 1964 he completed his doctorate in Canon Law at the Pontifical Lateran University in Rome and also received a master’s degree in religious education from the University of Louvain. Later that year, he was named assistant chancellor of the New Hampshire Diocese and began a career in which he held numerous diocesan and parish positions.

Pope Paul VI named him a Papal Chamberlain with the title of Monsignor, in 1966. In 1977, he was named the first Auxiliary Bishop of Manchester. In 1985, Bishop Mulvee was appointed the seventh Bishop of Wilmington, Delaware.

On May 18, 2017 Bishop Mulvee receives a Lumen Gentium Award for Administration and Stewardship - more here.

June 2017 Bishop Mulvee marked his 60th anniversary as a priest, 40th as a bishop.
Source: Dioceseofprovidence
Posted by Jesus Caritas Est at 8:52 AM