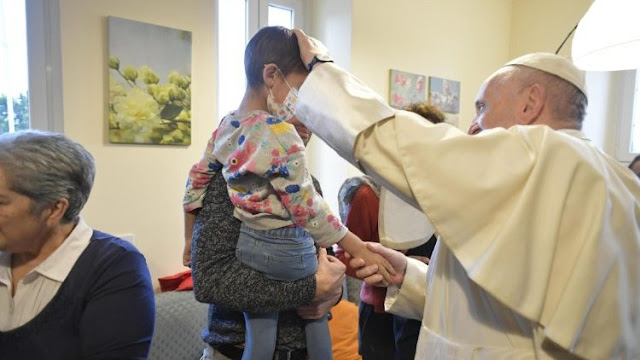 Pope makes surprise “Mercy Friday” visits to Rome residences for the sick
Pope Francis pays surprise visits to two communities in Rome’s periphery that care for the sick and a group of intellectually challenged children.
By Seàn-Patrick Lovett

Pope Francis began the tradition of making surprise “Mercy Friday” visits during the Jubilee of Mercy in 2016. But he has continued making these visits since then as a way of putting in practice the spiritual and corporal works of mercy.

On Friday December 7th he arrived, unannounced, at two live-in health care centres located in Rome’s southern outskirts. There he met with patients, residents and staff.

CasAmica: caring for needy patients and their families
The Pope left the Vatican around 3.30pm accompanied by the President of the Pontifical Council for the New Evangelization, Archbishop Rino Fisichella. His first stop was the “CasAmica”, a non-profit organization that assists patients needing continuous hospital care, and their families, all of whom face severe economic difficulties. Most come from southern Italy, although the structure also houses patients and families from North Africa and Eastern Europe.

The first surprise visit
Pope Francis himself rang the doorbell and was greeted with amazement by both the staff and guests, some of whom were in the kitchen and others in the games room. The Pope greeted them all, one by one, stopping to play with the children. He then listened to the stories of two young 13 and 11-year old boys who are suffering from cancer and spent time with the other patients and their families.

Il Ponte e l’Albero: caring for the intellectually challenged
“Il Ponte e l’Albero”, literally, “The Bridge and the Tree”, is so called because it is located near one of the bridges in Rome’s popular Laurentino district. The structure is essentially a therapeutic rehabilitation community caring for twelve intellectually challenged young people who come from particularly difficult family situations.

The second surprise visit
The Pope surprised the young people who were engaged in their afternoon recreational activities, and then sat down to speak and listen to them, answering their questions and hearing their stories.

Three of the boys had written to Pope Francis some months ago, asking him to visit them, telling him of the challenges they face, and describing the progress they are making thanks to the commitment of their doctors and health care operators.