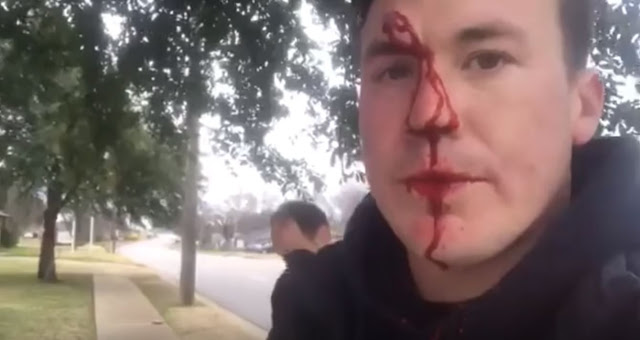 A Texas pro-lifer was  assaulted by a man who took issue with his ministry outside an abortion clinic. Since June, “Abortion Clinic LIVE” founder Ryan Roberts has been heading out to Whole Woman’s Health in Fort Worth to try and save unborn children. Roberts caught it all on tape.


Local pastor Mark Dickson of Sovereign LOVE Church was there with Roberts when the savage assault took place. He described the shocking incident to Faithwire.

“What you see in the video is our entire interaction with this man. Yet that interaction led to that man stopping in the middle of the road, getting out of his car, and punching Ryan Roberts several times in the face. All for sharing about Jesus Christ.”


“I knew that was going to happen eventually,” Roberts said of the attack. “I told myself if that happened I was going to take it. Like Jesus. And I did.“

“Of all the people who I thought would assault me out here it was not that guy,” Roberts explained.”That guy had Jesus stickers all over his truck. It was crazy.”

Afterwards, Roberts carried on preaching the love of Christ:


“Jesus loves you so much! I just got assaulted out here by a random man who drove by. You should see my face. I am covered in blood. But it’s okay. Because Jesus was crucified. He was beaten and bloodied. For you. Because he loves you. And He loves that little baby too!”


“When we are ministering at the abortion clinic and someone approaches us we do not know if they are going to be for what we are doing or against what we are doing,” he said. “All that we know is that inside that clinic they are murdering babies. We are there to proclaim the Gospel of Jesus Christ and to try to save as many of those babies as we can.”

Dickson revealed to Faithwire that Fort Worth Police have now identified the suspect and noted that charges will be filed in relation to the committing of a religious hate crime.
Edited from Faithwire