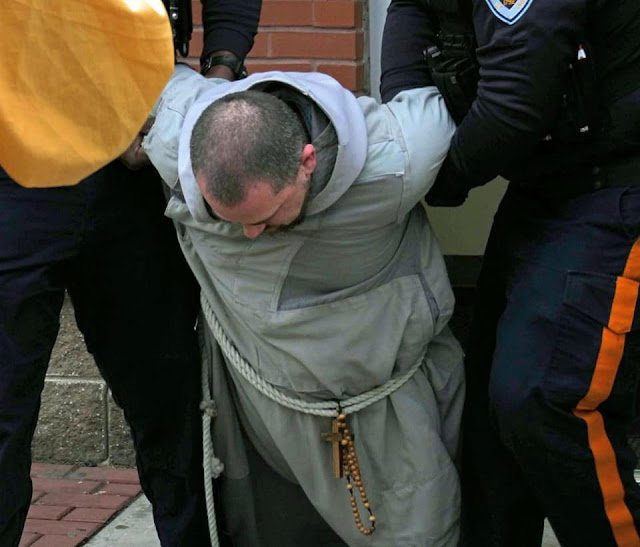 In a “Red Rose Rescue,” Franciscan Friars in New Jersey were arrestedat an abortion clinic.

In Trenton, New Jersey, brothers from the Franciscan Friars of the Renewal were arrested at a Planned Parenthood abortion clinic.

Inside the clinic, they handed out red roses with a card attached. The card read “a new life, however tiny, brings the promise of unrepeatable joy,” with phone numbers for pregnancy care centers.

Father Fidelis Moscinski and three other red rose rescuers participated, giving women and couples there words of encouragement. It was noted that one couple scheduled for an abortion left the clinic while they were there.

“That was a victory to us that they did leave. They were filing the paperwork for an abortion. We don’t know if they are going to go back; all we can say is they have left during the time of the rescue. We were very encouraged by that. If we hadn’t gone in there and that couple was not spoken to, that baby would probably be dead.”

The police arrived found the four pro-lifers who refused to leave. They were in conversation or sitting on the floor praying quietly and singing hymns and they said:

“We cannot leave. Innocent unborn children are about to be put to death and we have opted to stay with them.”

Fr. Stephen Imbarrato, was also present but not arrested, he said in a statement:

“We will go into the very places where the unborn are put to death and extend help to the moms. Should this help be refused we will not leave the abortion centers but remain in solidarity with the helpless victims oppressed by the injustice of abortion.”

“1. To offer help and words of encouragement to the mothers, to persuade them to turn away from their abortion decision and

2. to offer a loving act of defense on behalf of the unborn about to be aborted—to abide with them in the moment of their abandonment.”