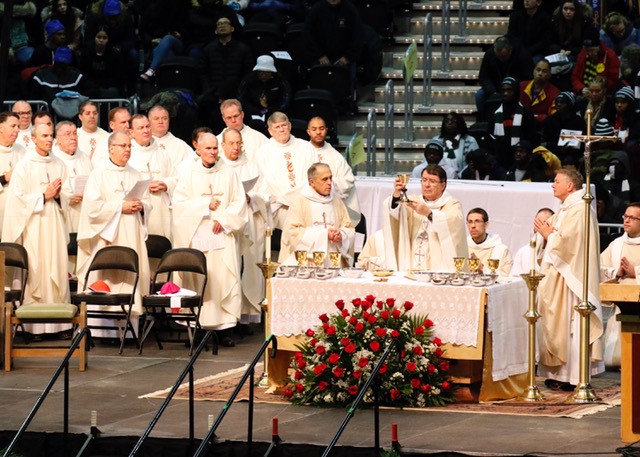 Archdiocese of Washington’s annual Youth Rally and Mass for Life, held Jan. 18 at the Capital One Arena in Washington.

The estimated crowd of 18,000 at the Mass came from the Washington area and from across the country and were joined by young adults from Sydney on their way to World Youth Day in Panama.

The main celebrant at the Mass, Archbishop Christophe Pierre, the apostolic nuncio to the United States, entered and left the arena smiling and waving a blessing to the spirited crowd of teens and young adults.

They had come, the archbishop said, for a day of prayer for the legal protection of unborn children and to stand up and speak out for all those who are vulnerable in society, and also “to give thanks to God for the gift of life.”

“Dear young people, thank you for the witness of your Catholic faith, both now in holy Mass, on the streets of Washington, and more importantly, when you return home to your families and neighborhoods,” he said.

Archbishop Pierre read a message from Pope Francis, who said he was united in prayer with the thousands of young people who had come to Washington to join the March for Life.

The pontiff in his message said the challenging task for each generation is “to uphold the inviolable dignity of human life.”

The pope’s message said respect for the sacredness of every life is essential in building a just society, where every child, and every person, is welcomed as a brother and sister.

Fifteen other bishops concelebrated the Mass including the president of the U.S. Conference of Catholic Bishops, Cardinal Daniel N. DiNardo of Galveston-Houston and Sydney Archbishop Anthony Fisher who was accompanying the Australian pilgrims. About 175 priests also concelebrated the Mass, assisted by about 30 permanent deacons.