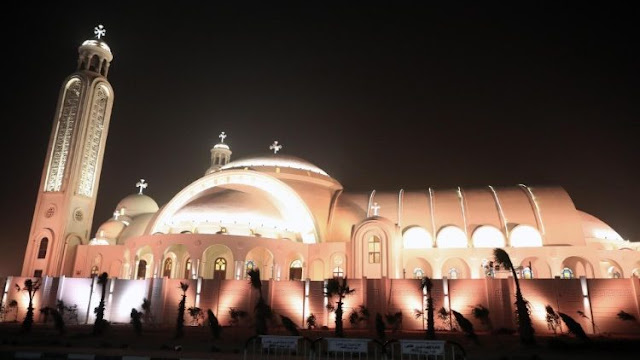 Imam prevented a deadly attack against church on the eve of Coptic Christmas Eve.
Sheikh Saad Askar shouted warnings to Christians after two Al-Azhar students noticed the possible attacker. The imam called on Christians and Muslims to :

“stand by each other’s side and take care of each other. Those who target places of worship have no religion and are neither Muslim nor Christian”.

The bomb attack against the church in east Cairo was averted thanks to the prompt action of the Muslim cleric, Imam Saad Askar who also called the police. When the bomb squad tried to dismantle the devices, one exploded killing a bomb disposal expert.
Visiting the church afterwards, Imam Askar said: “We have to stand by each other’s side and take care of each other. Those who target places of worship have no religion and are neither Muslim nor Christian”. The incident took place Saturday evening at the end of the celebrations for Coptic Orthodox Christmas at the Church of the Virgin Mary and Abu Seifin in Ezbat al-Haganah, Nasr City, an eastern suburb of the Egyptian capital. Two al-Azhar students told the imam about a stranger with a suitcase.
Along with mosque worker Gouda Shaaban Khalifa, 63, Askar ran after him, but he fled the scene leaving behind a trolley case. The police found three explosive devices inside. Major Mostafa Ebeid al-Azhari, from the bomb squad at the Cairo Security Directorate, defused two bombs before the third one exploded, killing him. According to local sources, Coptic Christians who were celebrating their Christmas, were the target. Sheikh Saad Askar, the imam of the mosque opposite the church, was thus able to warn people at the church, urging them to leave.
A video posted on social media shows the sheikh warning people in the church to quickly get away. When police arrived, they  dismantled the bombs, and looked for other explosive devices. Christians (mostly Orthodox Copts) are substantial minority (10 per cent) in Egypt, a Muslim majority country of almost 95 million people. In 2016 and 2017, several violent attacks were carried out against the Christian community. For this reason, this year’s Christmas celebrations were held under tight security. Edited from Asia News IT