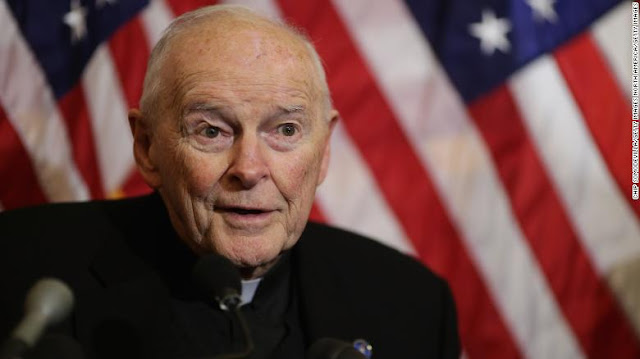 The Holy Press Office has published a statement from the Vatican Congregation for the Doctrine of the Faith, concerning the case of Theodore Edgar McCarrick.

The Congresso of the CDF, which investigated the accusations, has issued a decree finding McCarrick “guilty of the following delicts while a cleric: solicitation in the Sacrament of Confession, and sins against the Sixth Commandment with minors and with adults, with the aggravating factor of the abuse of power”.

The Congresso has imposed the penalty of “dismissal from the clerical state”.

The statement of the CDF notes that McCarrick’s appeal against this decision was considered on 13 February 2019 by the Ordinary Session of the Congregation for the Doctrine of the Faith. “Having examined the arguments in the recourse”, the statement says, “the Ordinary Session confirmed the decree of the Congresso”. McCarrick was notified of the decision on 15 February 2019.

This decision, following the recognition by the Holy Father, is definitive and admits of no further recourse or appeal.

History of allegations
In September 2017, the Archdiocese of New York reported to the Holy See accusations against then-Cardinal McCarrick, for allegedly abusing a male teenager in the 1970’s.

Pope Francis ordered an in-depth investigation into the allegations, to be carried out by the Archdiocese of New York. At the conclusion of this inquiry, all relevant documentation was transmitted to the Congregation for the Doctrine of the Faith, which is charged with investigating cases of sexual abuse by the clergy.

The results of the New York Archdiocesan Review Board investigation, were announced by Cardinal Timothy Dolan in June 2018. The Board found that the allegations against McCarrick were “credible and substantiated”. In his statement, Cardinal Dolan announced that, at the direction of Pope Francis, Cardinal Pietro Parolin, the Vatican Secretary of State, had instructed McCarrick that he was “no longer to exercise publicly his priestly ministry”.

The statement also noted that McCarrick had cooperated with the investigation, and accepted the decision of the Holy See, while maintaining his innocence.

On the same day, the Diocese of Metuchen, and the Archdiocese of Newark, both in New Jersey, revealed that they were aware of past allegations of sexual misconduct by McCarrick, including two that had resulted in legal settlements.

Resignation from Cardinalate
In the weeks following the announcement of the initial allegations against McCarrick, news sources published further accusations of misconduct against adult seminarians, as well as additional accusations of abuse of minors.


On 28 July 2018, the Holy See announced that Pope Francis had accepted McCarrick’s resignation from the College of Cardinals, and “ordered his suspension from the exercise of any public ministry, together with the obligation to remain in a house yet to be indicated to him, for a life of prayer and penance until the accusations made against him are examined in a regular canonical trial”.
Commitment of the Holy See
On October 6, 2018, a statement of the Holy See strongly affirmed: “Both abuse and its cover-up can no longer be tolerated and a different treatment for Bishops who have committed or covered up abuse, in fact represents a form of clericalism that is no longer acceptable”. The statement reiterates Pope Francis’ “pressing invitation” to “to unite forces to fight against the grave scourge of abuse within and beyond the Church, and to prevent such crimes from being committed in the future to the harm of the most innocent and most vulnerable in society”.

Ahead of the upcoming meeting in the Vatican of Presidents of Bishops’ Conferences of the world, set to take place from 21 to 24 February 2019, the statement emphasizes the words of Pope Francis in his Letter to the People of God: “the only way that we have to respond to this evil that has darkened so many lives is to experience it as a task regarding all of us as the People of God. This awareness of being part of a people and a shared history will enable us to acknowledge our past sins and mistakes with a penitential openness that can allow us to be renewed from within” (20 August 2018).

Letter of Cardinal Ouellet
On 7 October 2018, Cardinal Marc Ouellet, Prefect of the Congregation for Bishops, published an open letter in response to accusations by the former Papal Nuncio to Washington DC, concerning the McCarrick affair. In the letter, Cardinal Ouellet asks how it was possible that a man like McCarrick, could have been promoted on several occasions, to the point of being named Archbishop of Washington and being created a Cardinal. The letter notes that personnel decisions taken by popes are based on the best information available at the time and constitute prudential judgments that are not infallible. Cardinal Ouellet also points out how skillfully McCarrick defended himself against the allegations raised in his regard, and notes that, once real evidence became available, strong decisions were taken.

Cardinal Ouellet’s letter continues, stating how, during the pontificate of Pope emeritus Benedict XVI, McCarrick was “strongly urged” not to travel and not to appear in public. McCarrick disregarded these instructions. Cardinal Ouellet clarifies that these directives were not "sanctions" imposed by Benedict XVI, and repudiates the suggestion that any sanctions were lifted by Pope Francis. He notes also that the present Holy Father "had nothing to do with McCarrick's promotions in New York, Metuchen, Newark and Washington”, and removed him from his dignity as a Cardinal when an accusation of abuse of a minor was deemed credible.

Full text of statement from the CDF:
On 11 January 2019, the Congresso of the Congregation for the Doctrine of the Faith, at the conclusion of a penal process, issued a decree finding Theodore Edgar McCarrick, archbishop emeritus of Washington, D.C., guilty of the following delicts while a cleric: solicitation in the Sacrament of Confession, and sins against the Sixth Commandment with minors and with adults, with the aggravating factor of the abuse of power. The Congresso imposed on him the penalty of dismissal from the clerical state. On 13 February 2019, the Ordinary Session (Feria IV) of the Congregation for the Doctrine of the Faith considered the recourse he presented against this decision. Having examined the arguments in the recourse, the Ordinary Session confirmed the decree of the Congresso. This decision was notified to Theodore McCarrick on 15 February 2019. The Holy Father has recognized the definitive nature of this decision made in accord with law, rendering it a res iudicata (i.e., admitting of no further recourse).
FULL TEXT Release from Vatican News va
Posted by Jesus Caritas Est at 11:13 AM