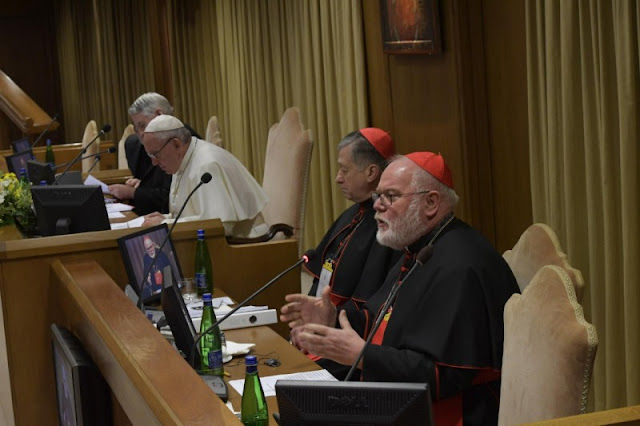 For Full Text Testimony of Cardinal Marx (discusses files) please see:
https://www.catholicnewsworld.com/2019/02/cardinal-marx-at-meeting-against-abuse.html
************
Protection of Minors: Press Briefing on Day Three
Day Three of the “Protection of Minors in the Church” Meeting in the Vatican focusses on the theme of “Transparency”. Among the participants at the Press Briefing, an African woman religious, the Jesuit Superior General, and the President of the German Bishops’ Conference.
By Vatican News

The Press Briefing began with the Moderator of the “Protection of Minors” Meeting, Jesuit Fr. Federico Lombardi, presenting what he called his four “observations” of the last 24 hours. He described the testimony of a victim-survivor on Friday evening, as “the most intense moment of our encounter so far”. “Everyone was deeply touched” by her testimony, he said, confirming how the fact of “personal listening” achieves important results.

The contribution of women
Fr. Lombardi then commented on the contribution of women at this Meeting: Dr Linda Ghisoni, Undersecretary for the Section for Laity of the Vatican Dicastery, who spoke on the theme of “Communio: to work together”; and Sr Veronica Openibo from Nigeria, who addressed the Bishops about “Openness: sent out into the world”.

Attitudes and sensitivities among the Bishops have already changed in three days, continued Fr. Lombardi. He stressed the special importance of follow-up based on the reflections and conclusions of the small working groups.

Working groups
The Prefect of the Vatican Dicastery for Communication, Paolo Ruffini, provided a brief summary of those working group interventions, one of which described this “Protection of Minors” Meeting as a “positive point of no-return”. Some groups discussed the importance of accompanying victims and re-building relationships with survivors and their families. Others explored the themes of collegiality and synodality, and how to apply them.

Further issues included the role of the laity and of the family, seminary training and priestly formation, and the need for more accurate screening and selection of candidates. The crisis in the family was identified as one cause of “affective immaturity” in some individuals. The universal conclusion was that “all the People of God are called to exercise responsibility” to ensure the protection of minors in the Church and the world.

Moving forward
Cardinal Reinhard Marx, President of the German Bishops’ Conference, addressed the Meeting on Saturday on the topic, “Transparency in a community of believers”. On Friday, the Cardinal met for about 90 minutes with 16 survivors of abuse from the ECA (Ending Clerical Abuse) Group, outside the Vatican. “We spoke with each other in a way that would not have been possible years ago”, he said. In fact, we have made progress in the field of “dialogue and openness”, said Cardinal Marx, stressing the importance of “translating words into facts”. Appeals are not enough, he added. We need to monitor and verify, “ensuring we are doing what is indicated in the guidelines”. The Cardinal described this “Protection of Minors in the Church” Meeting as “one step moving forward”, but a “good step forward”.

Identifying causes
Also on the panel at the Press Briefing was Fr Arturo Sosa Abascal, SJ, Superior General of the Society of Jesus. He spoke about “justice and healing”, about accountability, avoiding the culture of silence, asking forgiveness for mistakes made, and moving forward consistently and coherently. Fr Sosa also addressed the issue of priestly formation, saying that such training needs to promote “emotional maturity that enables us to have healthy relationships”. The Jesuit Father General said that, “acknowledging the truth about abuse is, in itself, a great step forward”. But, he said, it is also important “to identify the causes, in order to seek remedies and apply strategies”.

People of hope
In her intervention, Sr Veronica Openibo described her reaction to the testimony of an abuse victim in the Synod Hall on Friday evening: “Something happened in that Hall as we listened”, she said. It was “as though we witnessed what she experienced”. Sr. Veronica said the moving personal testimony of this survivor had increased the Bishops’ capacity “to listen, empathize, and sympathize”.

Part of her own reaction was to remember how we must all be “people of hope”, she said. At the same time, we must have “committed plans to ensure, not just young ones, but all vulnerable people, are safe”. “The buck stops with the Bishops”, she concluded, but all of us must “work together” to put an end to abuse.

God’s help
Finally, Archbishop Charles Scicluna of Malta also praised the contribution of women to this “Protection of Minors in the Church” Meeting. He called it “the extraordinary witness of women” that “brings the wisdom that we need”, and recalled Pope Francis’ definition of the Church as Woman.

Repeating his call for a “culture of disclosure”, Archbishop Scicluna spoke of transparency as “communion and sharing”. We need more communication with the victims, he said, claiming they are “not informed” and confirming they have “a role to play”.

In conclusion, the Archbishop thanked all those people, all over the world, who are accompanying the Bishops and participants at this Meeting with their prayers: “We need God’s help”, he said, “if we are to get it right”. FULL TEXT Release from Vatican News va