Conversion through the Witness of the Chair of St. Peter and its Popes - a Scholarly Insight by Stephan Groene 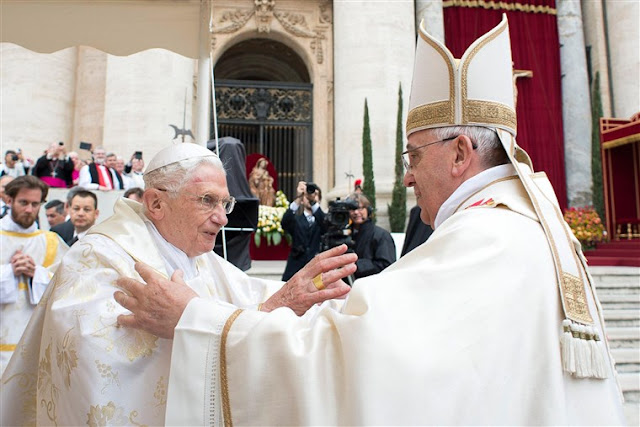 The Office of St. Peter: the most difficult vocation in the world
Preliminary Observation
On Sunday, Lätare, about 12 years ago, I found myself in the lap of the Holy Mother Church after I had wrestled for ten long years: with myself - and with the conditions in the German local church; the "why" goes far beyond here..
Two reasons were crucial to my conversion: the unchangeable doctrine of the church, as embodied in the wonderfully understandable 'Catechism of the Catholic Church'.
And the Holy Father in Rome, the then Benedict XVI., and who was already well known to me as Cardinal Ratzinger during my studies of theology. However, it was the Papal Office in and of itself - as a guarantor of the unchangeable doctrine of the church - that attracted me.
In my opinion Cardinal Ratzinger should have remained the good Prefect of the Congregation of the Faith, which he always was, at least in the time of St. John Paul II. He was ultimately not decisive for my conversion.
So I knew twelve years ago: even if a local church, such as the German, hopelessly a plaything of the devil; the world church remains unchanged with the Roman pope.
For we know from the history of the church: Asia Minor, originally proselytized by the apostle Paul, is today's Turkey - and Christianity is wiped out. And North Africa with St. Augustine is practically in the hands of Islam.
Nowhere is it written that the history of Millennial Christianity in Germany must be written down.

Francis: the saint of my crossing
For a Protestant, saints are at best models, and at the worst disgusting hypocrites, for holiness is in this life inaccessible, since it is only 'given by faith', never through works.
Through the millennium dam of the blessing of homosexuals in German Protestantism, I knew: lived homosexuality should never be blessed, for it is one of the gravest sins. Nowhere in Protestantism does the catechism have this meaning, as in Catholicism.
And all it took was a little something to convince me of Catholicism. I read from a small booklet with original quotations from St. Francis and the three-legged legend. For example, one recommendation was to chew donkey dung to quench an overly fast tongue - so you can fight envy, resentment and quarrels too!
I thought: if it is possible to live the gospel as Saint Francis did, then Martin Luther must be wrong.
Well, it was and is hard to assume that Saint Francis is such a big hypocrite that he fooled all people - so the gospel is alive in Catholicism!

God's comfort - as Our Lady wished in Fatima
Next to St. Francis, I was given a small statue made of limewood: Mary in prayerful posture, praying - as simple as an angel of God. I did not think much of it back then.
Since my Confirmation Saint is Padre Pio, who wore the stigmata of Jesus, the stigmata on his body - as did St. Francis -, I thought, early on, how this can be done: to suffer the suffering of God with us sinners?
As Christians, we are called to stand in prayer for each other - and to support each other through gifts, words and works.
This includes sacrifices, e.g. when St. Franciscan Maximilian Kolbe dies of starvation for a polish father in the Auschwitz extermination camp.
In my opinion, the most beautiful unfolding of our faith is precisely what Martin Luther has never understood at all: the self-sacrificing love of God!
For God lives on Golgotha ​​today as he did then, and because he lives, he suffers no less than two thousand years ago today!
And he suffers no less among the godless heathen than among the disobedience of us Catholics - and wants to be comforted.
We love Jesus, when we imagine Him weeping for His lost sheep - and comforting Him - like Saint Veronica with the sweat cloth, and wanting to be with Him - like the Blessed Mother. There is hardly a more intimate love than to suffer for Jesus - and His representative in Rome. This is essentially the message of Mary's apparitions in Fatima: comforting Jesus and Mary through prayer and sacrifice because the joy of God is so great and glorious.

Feeling with the Church - Sentire cum Ecclesia
Jesus Christ is the Church because the Church is His body. How beautiful it is, if we know exactly: St. Peter was in Rome and died there. And there is his grave. And then there was a successor and then another one today. This is what we call, inter alia, Apostolic Succession (succession).
There has never been a break. So who sees the Holy Father today, encounters Jesus in another form.
The promise to the fisherman Peter from Galilee today is Francis: "You are Peter and on this rock I will build my church and the gates of the underworld will not overtake it" (Mt 16:18).
This dogma of infallibility is the core and the star of Catholicism: "that this throne of St. Peter is always untouched by any error, according to the divine promises of our Lord and Redeemer made to the princes of his disciples" (DH 3070: semper errore illibatam permanere).
For the Protestants, there is no pity for the Church: the gospel is accepted by faith alone - and enough!
But what is really going on with us Catholics? Are we suffering with Peter? Are we trying to put ourselves in the position of His representative?

What if the Vatican were a stock corporation ...
In Germany we have many large automobile companies, for example Daimler-Benz, BMW and Volkswagen. They all produce motor vehicles that have all four wheels, sometimes just three (trikes) or even two (bikes). It has never happened - never! - that a Daimler boss would have praised the Volkswagen cars - or vice versa. It has never happened that a BMW boss in public pulled the cars of VW or Mercedes in the dirt - never!
The unwritten law applies in the free market: there is good - and better! But never make the competitor bad! Of course, jokes are allowed - and sharp remarks.
Every clever seller knows: all companies make up the common market - and the competitors talk badly, ultimately harming everyone.

Why do the dubia cardinals, Archbishop Viganò and Cardinal Müller love accusations?
I'm really not a Vaticanist, so one who could say something enlightening about this or that case.
I'm only good at common sense - like all people - and that makes me think the following.
It was the Pharisees who wanted to trap Jesus Christ with their catch questions: they could not rejoice in the good and the many healings, but wanted to make a rope for the Savior of the world - the dubia cardinals seem to have their model here. Is it really only about footnote 351 in a secondary exhortation as in Amoris laetitia? Or is it rather the justification of proxy wars, in which the seemingly conservative fight against the alleged modernists?

It was the traitor of Judas who did not like Jesus Christ at all, so he betrayed him and ran away. Is Archbishop Viganò's gait in the self-chosen underground really a model for fear of life and limb? Or was he wisely afraid of the prosecutor of North America in order not to be prosecuted in the abuse cases? Is not a shepherd, running away from the alleged wolf on the Cathedra of Peter, a hireling?
It was Martin Luther who warned many times before of the 'Antichrist' in Rome - at least since his writing of the 'Babylonian captivity of the Church' in 1520. He thought that the whore of Babylon from the Revelation of John could be found at Rome on the Tiber at seven Suggest hills. When Cardinal Müller uses the word 'Antichrist' in his so-called 'Faith Manifesto', it shudders me as a former Lutheran. Twice he uses it - positively he quotes only Benedict XVI, but he does not mention the Holy Father Francis in any word. Is Cardinal Müller thus a Luther Revividus (a recurring Luther)?

Do we have Sympathy for the Holy Father?
How many thousands, if not millions of letters, newspaper articles, television programs, videos and social media commentaries are written about the Holy Father? And in how many speeches are not about malice, insults and distortions, but about the truth?
And when is it about love?

When God lives and Jesus Christ is His Son, when do we understand that our Holy Father is His representative, deserving not only respect but also understanding and loving prayer?
When the whole godless world is ripping its mouth, how painful must the enemies within the church be for the Son of the living God and His representative?
Is not our Pope Francis a human being, but only the target of intrigues, stupidities and power struggles between modernists and traditionalists?
In my opinion, the abuse crisis has no reason in the birth of an Argentinean-born Argentinean - and this man is not the one who rips the church to pieces.

No, this man is the chosen Pontifex Maximus, who has the promise of Jesus: "Do it to Peter and super hanc petram aedificabo ecclesiam meam" (Mt 18:16)
And you, gentlemen clericalists: what promise do you have? 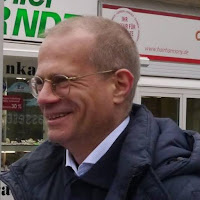 About the Author: Stephan Gröne, I was born 1966 in Berlin, Capital of Germany. At the age of 25 I found Jesus Christ.  I studied ‚Protestant Theology‘ with a Diploma at Humboldt-University.
As a Protestant I preached the Gospel. I teach religion in public schools and had a research contract with University of Zurich (Switzerland) to analyse paradoxes and write a book on it: ‚Gödel, Wittgenstein, Gott: Paradoxes in Philosophy and Theology‘.
As a Catholic  I am praying and writing articles in my blog.
**************
Stephan Gröne, lives in Germany and submitted this Article to Catholic News World