Pope Francis to Indigenous "God created the earth for the benefit of everyone, so that it would be a welcoming space where nobody felt excluded..." FULL TEXT 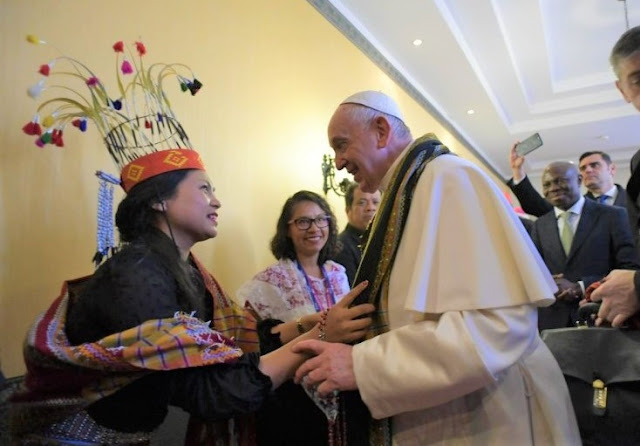 I thank Mrs. Myrna Cunningham for her kind words and I am pleased to greet those who, coinciding with the meetings of the Council of Governors, have celebrated the fourth World Meeting of the Indigenous People's Forum, convened by the International Fund for Agricultural Development (Ifad) . The theme of your work was: "to promote the knowledge and innovations of the original peoples to create resilience to climate change and sustainable development".

The presence of all of you here shows that environmental issues are of utmost importance and invites us to look again at our planet, wounded in many regions by human greed, by war conflicts that generate a flood of ills and misfortunes, as also from natural disasters that leave in their passage scarcity and devastation. We can not continue to ignore these scourges, responding to them with indifference and lack of solidarity, or postponing the measures that must be dealt with effectively. On the contrary, only a strong sense of fraternity will strengthen our hands to help today those who need it and open the door of tomorrow to the generations that come behind us.

God created the earth for the benefit of everyone, so that it would be a welcoming space where nobody felt excluded and we could all find a home. Our planet is rich in natural resources. And the original peoples, with their copious variety of languages, cultures, traditions, knowledge and ancestral methods, become for everyone an alarm bell, which highlights the fact that man is not the owner of nature, but only the one who manages it, the one whose vocation is to watch over it with care, so that its biodiversity is not lost and the water can continue to be healthy and crystalline, the pure air, the leafy woods and the fertile soil.

The indigenous peoples are a living cry in favor of hope. They remind us that we human beings have a shared responsibility in the care of the "common home". And if certain decisions taken so far have ruined it, it's never too late to learn the lesson and acquire a new lifestyle. It is about adopting a way of proceeding that, abandoning superficial approaches and harmful habits or exploitation, overcomes atrocious individualism, convulsive consumerism and cold selfishness. The earth suffers and the original peoples know of dialogue with the earth, they know what it is to listen to the earth, to see the earth, to touch the earth. They know the art of living well in harmony with the earth. And we must learn this that perhaps we are tempted into a sort of progressive illusion at the expense of the earth. We never forget the saying of our grandparents: "God always forgives, we humans forgive sometimes, nature never forgives". And we are seeing it, with ill-treatment and exploitation. To you, who know how to dialogue with the earth, is entrusted with the task of transmitting this ancestral wisdom to us.

If we join forces and, with a constructive spirit, we will initiate a patient and generous dialogue, we will end up becoming more aware of the fact that we need each other; that a behavior harmful to the environment that surrounds us has negative repercussions on the serenity and fluidity of coexistence, which sometimes has not been cohabitation but destruction; that the natives can not continue to suffer injustice and young people are entitled to a better world than ours and expect convincing answers from us.

Thanks to all of you for the tenacity with which you affirm that the earth does not exist only to be exploited without any regard, even to sing it, to guard it, to caress it. Thank you for raising your voice to assert that respect for the environment must always be safeguarded above exclusively economic and financial interests. The experience of IFAD, its technical expertise, as well as the means at its disposal, lend a valuable service to smooth paths that recognize that "a technological and economic development that does not leave a better world and a quality of life wholly superior, it can not be considered progress "(Encyclical Letter Laudato si ', 194).

And, in our collective imagination, there is also a danger: we so-called civilized peoples "we are first class" and the so-called original or indigenous peoples "are second-class". No. It is the great mistake of an uprooted progress, freed from the earth. The two peoples must dialogue. Today a "cultural hybridization" is urgent where the wisdom of the original peoples can dialogue on the same level with the wisdom of the most developed peoples, without annulling themselves. The "cultural hybridization" would be the goal towards which we should strive with the same dignity.
As I encourage you to move forward, I plead with God not to stop accompanying your communities and those in the IFAD with his blessings to protect those living in the poorest and poorest rural areas on the planet, but richer in the wisdom of living with the nature.