Religious Sister Speaks at Vatican Meeting against Abuse "...to break any culture of silence and secrecy among us.." FULL TEXT + Video 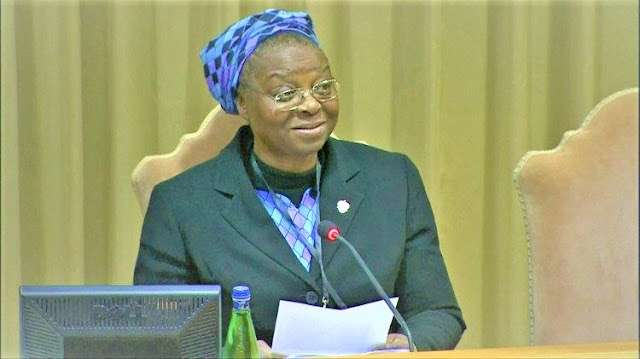 HOLY SEE PRESS OFFICE
23 February 2019
PREPARED TEXT
Openness to the World as a Consequence of the Ecclesial Mission
Address to Presidents of Bishops Conferences
23 February 2019
Sr. Veronica Openibo SHCJ
Society leader: Society of the Holy Child Jesus
“The Spirit of the Lord is upon me and anointed me to preach good news to
the poor. The Spirit has sent me to proclaim deliverance to the captives and
recovery of sight to the blind, to release the oppressed, to proclaim the Lord’s year
of favour”. (Luke 4:18-19)
Abstract
As a result of the self-understanding of her mission in the world today, the
Church needs to update and create new systems and practices that will promote
action without fear of making mistakes. Clerical sex abuse is a crisis that has
reduced the credibility of the Church when transparency should be the hallmark of
mission as followers of Jesus Christ. The fact that many accuse the Catholic
Church today of negligence is disturbing. The Church must do everything possible
to protect its young and vulnerable members. The focus should not to be on fear or
disgrace but rather on the Church’s mission to serve with integrity and justice.

Conclusion
We know that the greatest issue is the proclamation of the gospel in a way that
will touch the hearts of the young and old. We are called to proclaim the good news
but we must BE good news to the people we serve today. No wonder Pope Francis
has declared the month of October 2019 The Extra Ordinary Missionary Month.
The Church in its mission from Jesus Christ must be open to greater
transparency because we are sent to the world locally and globally. Our whole
being is not just about keeping the faith but living visibly and distinctively what we
claim to be. We are called like Jesus in his mission statement:
“The Spirit of the Lord is upon me and anointed me to preach good news to
the poor. The Spirit has sent me to proclaim deliverance to the captives and
recovery of sight to the blind, to release the oppressed, to proclaim the Lord’s year
of favour”. (Luke 4:18-19)
As an indicator or postscript, I emphasise the following:
The Spirit of the Lord is upon each of us here,
has anointed all of us,
to preach good news to the poor the vulnerable, protecting especially
defenceless children, seeking justice for the victims of abuse and taking steps to
prevent this abuse from recurring,
to proclaim deliverance to the captives the perpetrators are in need of
deliverance, conversion and transformation,
and recovery of sight to the blind those who are not seeing the issues, or
focusing on protecting ‘our own’, or keeping silent or covering up need recovery
of sight, to release the oppressed and to proclaim the Lord’s year of favour by taking
the necessary steps and maintaining zero tolerance with regard to sexual abuse we
will release the oppressed. This is our year of favour let us courageously take up
the responsibility to be truly transparent and accountable.
Returning to the title of this conference, another self-understanding passages
is from (Matthew 5:14-16):
“You are the light of the world. A city set on a mountain cannot be hidden. Nor
do they light a lamp and then put it under a bushel basket; it is set on a lampstand,
where it gives light to all in the house. Just so, your light must shine before others,
that they may see your good deeds and glorify your heavenly Father”.
I read with great interest many articles about the Pope’s reactions in the case
of the Chilean bishops – from a denial of accusations, to anger because of
deception and cover up, to the acceptance of resignations of three of the bishops. I
admire you, Brother Francis, for taking time as a true Jesuit, to discern and be
humble enough to change your mind, to apologize and take action – an example for
all of us.
Thank you, Pope Francis, for providing this opportunity for us to check and
see where we have acted strangely, ignorantly, secretly and complacently. I believe
we will change, with great determination, our total approach to reporting abuse, to
supporting the victims, to getting the right people to mentor and give support to
victims and, above all, to doing what we can to protect minors and vulnerable
adults from any form of abuse. Thank you, too, for providing women religious,
through the executive of the Union of Superiors General (UISG), an opportunity to
participate in this conference. Women have acquired a lot of useful experience to
offer in this field and have already done much to support victims and also to work
creatively on their own use of power and authority.
I hope and pray that at the end of this conference we will choose deliberately
to break any culture of silence and secrecy among us, to allow more light into our
Church. Let us acknowledge our vulnerability; be pro-active not reactive in
combating the challenges facing the world of the young and the vulnerable, and
look fearlessly into other issues of abuse in the Church and society.
May I remind all of us of Pope Francis’ own words:
“A Christian who does not move forward has an identity that is ‘not well’... The
Gospel is clear: the Lord sent them out saying: ‘go, go forward’! The Christian
walks, moves past difficulties and announces that the Kingdom of God is near”.
Thank you.