Pope Francis' 3 Suggestions to be Merciful - Do not Judge, Do not Condemn and Forgive 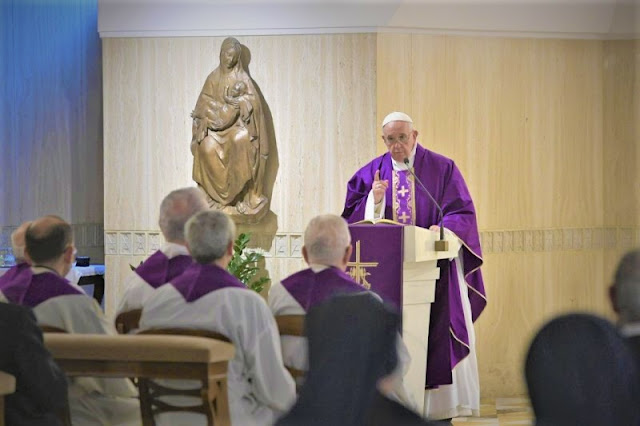 Pope Francis at Mass: Imitate the mercy of the Lord
During the Mass celebrated in the chapel of the Casa Santa Marta, the Pope speaks about the mercy of God and offers some suggestions for living the time of Lent to its fullness.
Vatican News Report:

Do not judge others; do not condemn; forgive: in this way you imitate the mercy of the Father. In the Mass at the Casa Santa Marta, Pope Francis reminds us that in order not “to not go astray” in life, we need “to imitate God”, “walk in the sight of the Father”. Beginning with the Gospel from St Luke, the Pope spoke especially about the mercy of God, capable of forgiving even the “worst” actions:

The mercy of God is such a great thing, very great. We must not forget this. How many people [say]: “I have done such terrible things. I have purchased my place in hell, I can’t turn back”. But do they think about the mercy of God? Let us remember that story about the poor widow lady who went to confess to the Curé of Ars. Her husband had committed suicide; he jumped from the bridge into the river. And she wept. She said, “But I am a sinner, a poor woman. But my poor husband! He is in hell. He committed suicide, and suicide is a mortal sin. He is in hell”. And the Curé of Ars said, “But wait a moment, ma’am, because between the bridge and the river, there is the mercy of God”. But to the very end, to the very end, there is the mercy of God.

Good habits for Lent
Pope Francis said that Jesus gives three practical suggestions to help us get in the habit of being merciful. First: to not “judge”. We should refrain from judging, especially in this time of Lent:

Also, it is a habit that gets mixed up in our life even without us realizing it. Always! Even by beginning a conversation: “Did you see what he did?” Judgement of others. Let us think about how many times each day we judge. All of us. But always through beginning a conversation, a comment about someone else: “But look, that person had plastic surgery! They’re uglier than before”.

Keeping our pockets open
In his homily, Pope Francis invited everyone to learn the wisdom of generosity, the main way to overcome “gossiping”. When we gossip about others, he said, “we are continually judging, continually condemning, and hardly forgiving: