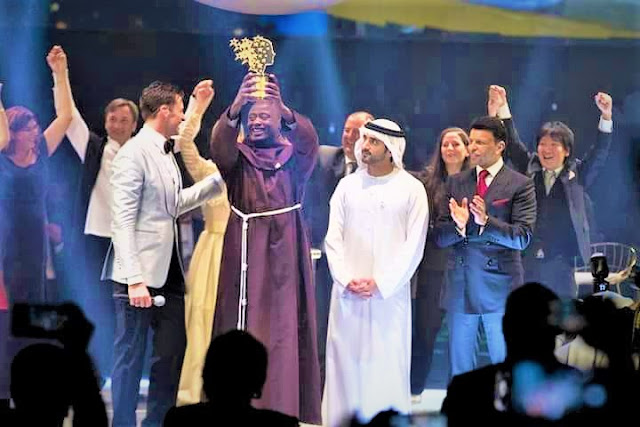 Brother Peter Tabichi is called an "exceptional teacher" who gives away 80% of his salary.
He has won a $1 million prize (£760,000) as the world's best teacher.

The award, was presented in a ceremony in Dubai, it acknowledges the "exceptional" teacher's commitment to pupils in part of Kenya's Rift Valley.

He gives away 80% of his pay to support pupils, at the Keriko Mixed Day Secondary School in Pwani Village, Nakuru. These students are very poor and often could not afford uniforms or books.

The competition is run by the Varkey Foundation, had 10,000 other nominations from 179 countries.

Br. Peter is member of the Catholic religious order founded by St Francis of Assisi in the 13th Century.

He teaches in groups of 70 or 80, in overcrowded classrooms and this causes problems for teachers.

"Peter - your story is the story of Africa, a young continent bursting with talent. Your students have shown that they can compete amongst the best in the world in science, technology and all fields of human endeavour," said the Kenyan president.

The founder of the prize, Sunny Varkey, says he hopes Brother Peter's story "will inspire those looking to enter the teaching profession and shine a powerful spotlight on the incredible work teachers do all over Kenya and throughout the world every day".
Edited from BBC and Vatican News va

This Lent consider Donating to Catholic News World which brings the Gospel to over 200 Countries World Wide! Every little bit helps - as a Donor you and your Family will be added to our Mass Prayers - You can add your prayer intention on the Donation site "Donor Wall":
https://donorbox.org/support-catholic-news-world-we-need-
Posted by Jesus Caritas Est at 10:34 AM

Brother Peter shows mercy to others as a follower of Divine Mercy Jesus!