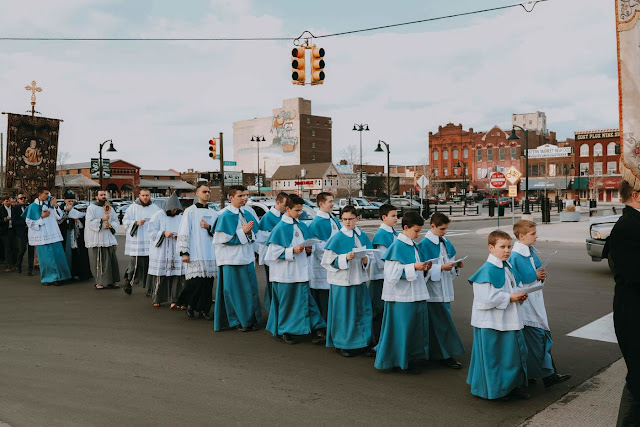 
“As Catholics, we’re told to live our faith in season and out of season, in the public square and in private, and that includes the city streets,” said Daniel Egan a parishioner. “If we’re not Catholic out there, we are truly failing to be authentically Christian.”

The procession was part of a full schedule of events at the parish, including Masses in the morning, noon and evening, confessions all day, a guided church tour, an Italian dinner and an organ recital.

With people in and out of the parish for most of the day, St. Joseph parishioners were on call as volunteer ushers, cooks and hostesses for the Italian dinner.

“People pass by the church every single day,” Nemecek continued. “But the doors are open all day, every day. For the people who never go inside, who don’t come to Jesus, we bring Jesus to them. We bring him out into the streets, where the people are.”
Image source: Altar servers process with St. Joseph Oratory parishioners in Eastern Market in Detroit. (Naomi Vrazo | Detroit Catholic)

This Lent consider Donating to Catholic News World which brings the Gospel to over 200 Countries World Wide! Every little bit helps - as a Donor you and your Family will be added to our Mass Prayers - You can add your prayer intention on the Donation site "Donor Wall":

Posted by Jesus Caritas Est at 9:26 AM