A Special Knock at the Door as Pope Francis visits Pope Emeritus Benedict to Wish him a Happy Birthday! 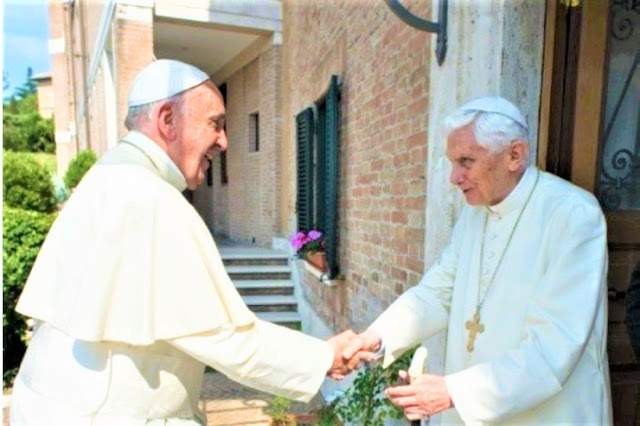 Pope Francis visits Pope emeritus on eve of Benedict’s birthday
At the beginning of Holy Week, Pope Francis makes a special visit to the Mater Ecclesiae Monastery to offer Easter greetings to the Pope emeritus, Benedict XVI.
The visit was announced by ad interim director of the Holy See Press Office, Alessandro Gisotti, who noted that the encounter also offered Pope Francis the opportunity, “with particular affection”, to wish Benedict a happy 92nd birthday.

Joseph Ratzinger was elected to the papacy in 2005 just three days after his 78th birthday, making him one of the oldest popes at the time of his election.

At the time of his resignation, Benedict XVI was 85 years old, having reigned for 7 years, 315 days.
FULL TEXT Release from VaticanNews.va
Posted by Jesus Caritas Est at 1:27 PM