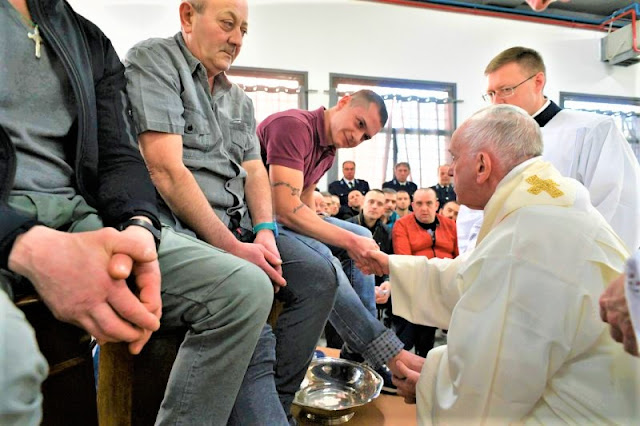 Pope Francis celebrated the Mass of the Lord’s Supper on Holy Thursday in a prison near Rome, It was there that he washed the feet of 12 inmates.

This is the fifth time that Pope Francis has celebrated the Mass in Coena Domini at a prison.

The Pope celebrated this year’s Mass of the Lord’s Supper in the prison of Velletri in the South of Rome.

The “District House of Velletri” is a medium-security facility that houses 577 inmates, 60% of whom are foreigners.

Pope Francis thanked the inmates for their welcome and said he had received a beautiful letter from several of them.

Jesus first washed the feet of his Apostles and the Pope said the act of service,  was usually done by slaves. “He, the Lord who contained in himself all power, carries out the gesture of a slave,” he said.

Jesus, he said, told his disciples to do the same for each other in service.

“Be brothers in service: not in ambition but in service,” the Pope said.

Each of us, said Pope Francis, needs to be at the service of our neighbor.

After the homily, Pope Francis washed the feet of 12 prisoners from 4 nations. Nine were Italian, and 1 each from Brazil, Ivory Coast, and Morocco.
Edited from Vatican News va - Image source share from Vatican.va
Posted by Jesus Caritas Est at 10:30 AM