At Mass Pope Francis say "But charge forward in the depth of prayer, of docility and a heart open to God." 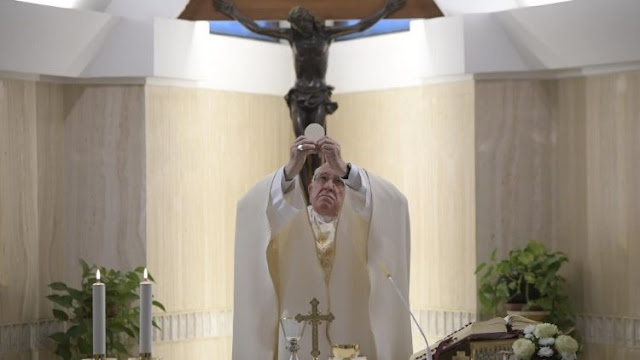 Pope at Mass: St. Paul, hard-headed but not hard-hearted
In his homily at Mass in the Casa Santa Marta on Friday, Pope Francis invites Christians to be docile to the voice of the Lord, after the model of St. Paul.
Taking his cue from the conversion of St. Paul on the road to Damascus, narrated in the first reading at daily Mass, Pope Francis said the Apostle to the Gentiles was hard-headed but not hard-hearted.

The Holy Father said the moment of his conversion “marked a change in the course of Salvation History”. It exposed the Church’s universality and its openness to “pagans, Gentiles, and those who were not Israelites”, which, the Pope said, the Lord permitted because “it was important”.

Consistency and zeal
Reflecting on St. Paul’s character, Pope Francis called him “a forceful man” who was “enamored with the purity of the law”, saying he was “honest” and “consistent”, though he had “a difficult character”.

“First of all, he was consistent, because he was a man open to God. If he persecuted Christians, it was because he was convinced that God desired it. But how can that be? Never mind how: he was convinced of it. This is the zeal he carried for the purity of the house of God, for the glory of God. A heart open to the voice of the Lord. And he risked all, and charged ahead. Another characteristic of his actions is that he was a docile man – full of docility – and was not hard-headed.”

Docility and openness to God’s voice
Pope Francis pointed out that, even though he was stubborn, St. Paul was not hard-hearted. He was “open to God’s indications”.

He had incarcerated and killed Christians “with a fire inside him”, but “as soon as he heard the voice of the Lord, he became like a child, letting himself be led.”

“All his convictions stayed silent, waiting for the voice of the Lord: ‘What must I do, Lord?’ And he went to that encounter at Damascus, to meet that other docile man, and let himself be catechized like a child and be baptized like a child. Then he regains his strength, and what does he do? He is silent. He leaves for Arabia to pray, for how long we don’t know. Maybe years, we don’t know. Docility. Openness to the voice of God and docility. His is an example for our life.”

Christian charism of the great and small
The Pope said there are numerous courageous men and women today who risk their lives to find new paths for the Church.

“Let us seek new paths; it will do us all good. As long as they are the paths of the Lord. But charge forward in the depth of prayer, of docility and a heart open to God. This is how true change takes place in the Church, with people who know how to fight in the great and in the small.”
The Christian, Pope Francis concluded, must have the charism of the great and of the small.

And he prayed “for the grace to be docile to the voice of the Lord and for a heart open to the Lord; for the grace not to be afraid to do great things and the sensitivity to pay attention to the small things.”
FULL TEXT from Vaticannews.va