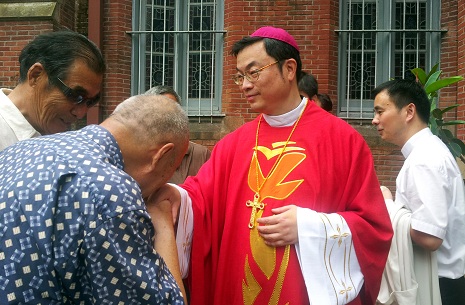 Asia News report: Under house arrest, the bishop of Shanghai posts a prayer to Our Lady of Sheshan
Mgr Thaddeus Ma Daqin has been held in isolation in Sheshan since his episcopal ordination.

Shanghai (AsiaNews) – Mgr Thaddeus Ma Daqin, bishop of Shanghai, has been under house arrest since 2012. On his blog today he posted some invocations to Our Lady of Sheshan, Mary help of Christians, whose feast day is celebrated today.

The National Shrine of Sheshan is not far from where Mgr Ma is being held in isolation, banned from meeting people and wearing episcopal insignia.

On the day of his episcopal ordination, 7 July 2012, he was placed under house arrest and in solitary confinement at the Sheshan seminary, for saying that he wanted to quit the Patriotic Association. In recent years, the restrictions on his movements have been loosened.

In June 2016, Mgr Ma upset many Catholics in China by publishing an article in which he said he regretted leaving the Chinese Patriotic Catholic Association. Three months later he was allowed back in, but as a simple priest, not as a bishop.

Once a while, the prelate has been able to break his isolation, by posting some thoughts or reflections on his blog.

Two days ago, Pope Francis mentioned the feast day and addressed the faithful of China by expressing his "special closeness and affection" for them, asking them to remain "united in the communion with the universal Church" amid their “daily trials and tribulations".

Today's blog includes a prayer to Our Lady of Sheshan written by Benedict XVI and added to his Letter to Chinese Catholics in 2007 establishing an annual World Day of Prayer for the Church in China (24 May), and ending with some invocations to the Mother of China.

Virgin Most Holy, Mother of the Incarnate Word and our Mother,

venerated in the Shrine of Sheshan under the title "Help of Christians",

the entire Church in China looks to you with devout affection.

We come before you today to implore your protection.

Look upon the People of God and, with a mother’s care, guide them

along the paths of truth and love, so that they may always be

a leaven of harmonious coexistence among all citizens.

Mother of China, pray for us!

Mother of Sheshan, pray for us!

Mother Help of Christians, pray for us!

Mother of Good Counsel, pray for us!