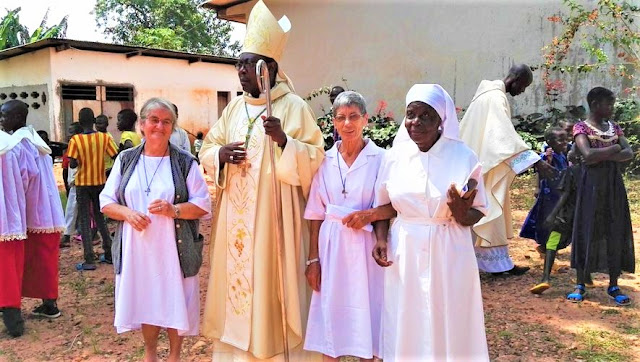 A spanish speaking Nun was beheaded in the Central African Republic on Monday, May 20, 2019. Agenzia Fides reports: "I have no idea. In our area ritual killings do not take place", says His Exc. Mgr. Juan José Aguirre Muños, Bishop of Bangassou, to whom Agenzia Fides has asked for more details on the murder of Sister Ines Nieves Sancho, the 77-year-old Spanish nun of the local community of the Daughters of Jesus, murdered in the early hours of May 20, in the village of Nola, near Berberati, in the south-west of the Central African Republic, on the border with Cameroon.
"I am a thousand miles from Nola. I phoned the Bishop and the Provincial Superior and they did not tell me much more than what had already been published", said Mgr. Aguirre, to whom we asked if he believed in the news that the murderers took parts of the body to be used in propitiatory rites after beheading the nun. "They tell us that in the areas of the Central African Republic on the border with Cameroon, there are Cameroonians who practice ritual murders to extract organs to be used in propitiatory rites in order to bring luck in the search for diamonds, one of the riches of the area", said Mgr. Aguirre who states "here in Bangassou this does not happen".
Sister Ines Nieves Sancho, despite her age, continued to serve in Nola where she gave the girls sewing lessons. And in one of the rooms of the building she used to teach girls how to sew and learn a trade.
This morning, May 22, during the general audience in St. Peter's Square Pope Francis recalled the missionary killed: "Today I would like to remember Sister Ines, 77, educator of poor girls for decades, barbarously killed in Central Africa in her room where she taught how to sew, an extra woman who gives her life for Jesus at the service of the poor", underlined the Holy Father. (L.M.) (Source: Agenzia Fides, 22/5/2019) (Sister Ines is pictured second from the right in the pic)

********************************
DONATE Now to Catholic News World, a Mission, which brings the Gospel to over 200 Countries World Wide! Easy Just Click the LINK below!
If you do not support Christian media who will?
Every little bit helps - as a Donor you and your Family will be added to our Church Prayers - You can add your prayer intention on the Donation site "Donor Wall":

P
Posted by Jesus Caritas Est at 7:21 AM