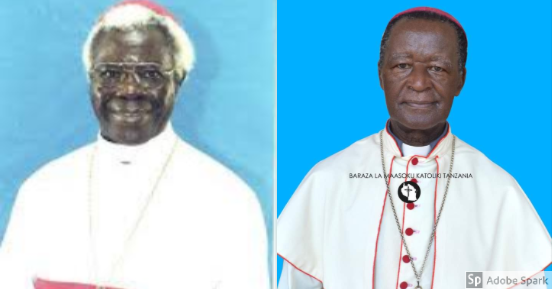 The Catholic Church in Tanzania is mourning the death of two emeritus bishops, Bishop emeritus of Mtwara Diocese Rt. Rev. Gabriel Mmole and Bishop Emeritus of Mbinga Diocese Rt. Rev. Emmanuel Mapunda who died within this week.
Bishop Mmole died on 15th May 2019 at his house after a long sickness while Bishop Mapunda died on 16th May 2019 in the air plane when he was being rushed to Muhimbili National Hospital in Dar es Salaam for treatment.
Bishop Mmole will be buried on 21st at the Cathedral of All Saints in Mtwara Diocese and Bishop Mapunda will be buried on 24th at the Cathedral of St. Killian in Mbinga Diocese.
Announcing the death of Bishop Mmole

, Bishop of Mtwara Diocese Rt. Rev Titus Mdoe said the late bishop Mmole has been sickly for long and that because of his age he continued to become weak. The late Bishop had been receiving treatment from different hospitals but his condition continued to worsen, leading to his death.
Bishop Mdoe said that the diocese has lost a good shepherd who in his life dedicated himself on education.
“He gave education first priority especially to the community around the coastal area whose interest is largely fishing.
He established different Catholic Schools within Diocese and later he was able to set up the Stella Maris University affiliated from Saint Augustine University of Tanzania,” he said.
The late Bishop Mmole wrote various books that have helped build the foundations of the faith of believers. Among his books include ‘You are the salt of the world’ and ‘Uchumba sio ndoa’ which means ‘Betrothal is not marriage’.
The Catholic bishops in Tanzania offered their condolences to Bishop Mdoe, priests, religious and lay people of Mtwara Diocese for the loss of their bishop.

Bishop Mmole served the Church as Bishop of the Catholic Church in Mtwara for more than 28 years. He was born on January 1 in 1939 in the village with Nangoo Parish in Masasi District and did his primary education at Ndanda Primary School; he did the middle School at Lukuledi from 1955 to 1956 and later joined the Peramiho Teachers College in 1959-1960. In 1962-1964 he did his education at Namupa junior Seminar which is located in Lindi. In 1967-1970 he went for theology in Major Peramiho Seminary and he was ordained to priesthood in 1971.
In 1973 he joined the College of Pastors and Religion (GABA) in Uganda. In 1974 he was the Head of Namupa junior Seminar until March 12 1988 when Pope (Now saint) John Paul II appointed him as bishop of Mtwara Diocese.
While serving as bishop he served Tanzania Episcopal Conference (TEC), as a Chairman of Seas, Immigrants and Foreign Immigration Commission. Late Bishop Gabriel Mmole retired on October 15, 2016 after reaching 75 years of age according to the Catholic Church system.
Late Bishop Emmanuel Mapunda was born was born on 10th December 1935. He was ordained to a priest of Songea Diocese on 8th August 1965; he was appointed Bishop of Mbinga on 22nd December 1986 and he was consecrated as Bishop on 6th January 1987. He retired from episcopate in March 2011.
Full Text Release from Amecea - Episcopal Conferences of E. Africa - Sarah Pelaji
Posted by Jesus Caritas Est at 9:12 AM