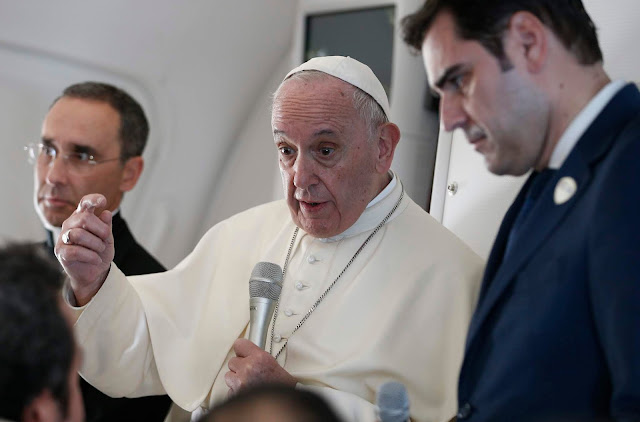 Vatican News va report: Pope inflight press conference: 'I thank the Lord for the energy he gives me!'
Answering questions put to him by reporters on the papal flight back from Bulgaria and North Macedonia, Pope Francis touched on topics including relations with the Orthodox Church, Women’s Diaconate and... the secret of his own strength and energy!
By Linda Bordoni from Andrea Tornielli's inflight transcript

During the flight bringing Pope Francis back to Rome after a three-day apostolic visit to the West Balkan nations of Bulgaria and North Macedonia, Pope Francis spent some time chatting to reporters and answering their questions.

Impressions of Bulgaria and North Macedonia
Asked about his strongest impressions regarding the two nations he has just visited, Pope Francis said “They are two totally different countries”.

Commenting on the fact that North Macedonia has recently managed to establish itself as a nation, he said it is symbol of how Christianity entered into the West through the Apostle Paul who wanted to go to Asia, but was called to Macedonia.

“The people of Macedonia never miss the opportunity to remind us that Christianity entered through their door” he said.

Bulgaria, he said, suffered much war and violence, and he referred to the 200,000 Russian soldiers who died in 1877 to regain independence from the Ottoman Empire.

“So many struggles for independence, so much blood, so much mysticism in order to consolidate an identity” the Pope said noting that in both countries Orthodox Christian communities, Catholics and Muslims live together.

He praised the fact that he saw good relations between the different faiths in both nations and expressed admiration for a profession of “respect” for diversity and for human rights rather than of “tolerance”.

Where does the Pope get his energy?
One journalist asked him where he finds the energy and strength needed to travel and work as he does.

“First of all I would like to say I do not resort to witchcraft!” the Pope said.

He described it as “a gift from the Lord” and revealed that when he goes places he “forgets himself” and he is “just there”.

He confessed that afterwards he feels tired: “I don't tire of travelling. Then I get tired, afterwards. I think the Lord gives me strength. I ask the Lord to be faithful, to serve him, may these journeys not be tourism. And then... I don't work that hard!”

He described the Orthodox Patriarchs as men of God. Recalling the North Macedonian president’s words about the schism of the East he said: “Now is the Pope coming to sew up the schism? I don't know. We are brothers, we cannot worship the Holy Trinity without joining our hands as brothers”.

The Pope said some issues are under scrutiny in order for truth to be clear: “I am not afraid of the truth. I am only afraid of God’s judgment”.

Women’s Diaconate
Noting that in Bulgaria the Pope visited an Orthodox community that has cultivated a tradition of ordaining women deacons to proclaim the Gospel, and that in a few days he will be meeting the International Union of Superiors General, a journalist asked Pope Francis what he has learnt from the Study Commission's report on the Women’s Diaconate, and about his thoughts on the issue.

Pope Francis created the Study Commission on the Women's Diaconate in 2016.

Answering the reporter’s question, the Pope said the Commission worked for almost two years until it came to a halt due to differences in vision.

He said that regarding women’s diaconate “there is a way of conceiving it with a different vision to that of the male diaconate”.
Although there are historical documents regarding the ministry of women deacons, the Pope said “there is no certainty that their ordination was in the same form and purpose as male ordination”.

He said the commission did a good job and their conclusions can serve to move forward in the quest for a definitive “yes or no” concluding that theologians are at a point in which they are studying the various theses.

Moving memories
After the questions, Pope Francis said he wanted to recall how touched he was to experience the gentleness and meekness with which the nuns at Mother Teresa’s memorial cared for the poor: “they cared for the poor without paternalism, as if they were children (…) with the capacity to reach out and caress the poor”.

“I dare not say that there is a ‘culture of insult’” he said, but it's a weapon, just as shouting at others, slander and defamation are weapons.

The gentleness of the nuns, the Pope said, made me “feel” the mother Church, “and I thank Macedonia for this treasure”.

Pope Francis concluded recalling the moving experience of celebrating First Communion while in Bulgaria: “I was moved because my memory took me back to my own First Communion on 8 October 1944 (…) The Church looks after children, they are on the margins because they are still small, but they are a promise, they must grow. I ‘felt’ at that moment that those 245 children are the future of the Church and of Bulgaria”.