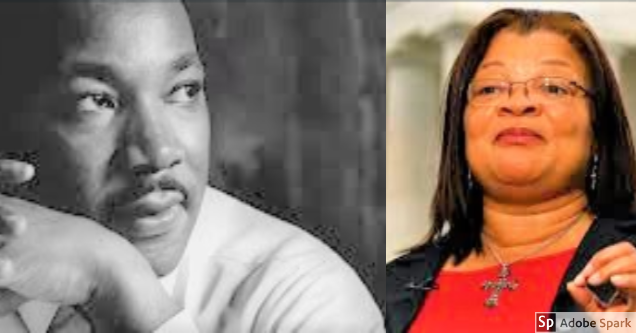 In an interview with Breitbart News Dr. Alveda King, niece of civil rights leader Martin Luther King Jr. and director of African-American Outreach for Priests for Life, spoke about the recent laws enacted to protect the unborn.
Dr. Alveda King, told Breitbart News that the recently passed pro-life laws seek to grant “civil rights” to babies in the womb and protect women, not punish them. King was speaking on SiriusXM’s Breitbart News Tonight with Breitbart Senior Editor Rebecca Mansour.
King pointed to a famous quote from her uncle: “The ultimate measure of a man is not where he stands in moments of comfort and convenience, but where he stands at times of challenge and controversy.” “America is right to be concerned,” King said of the abortion debate around the nation, but she argued that the pro-life laws in states like Alabama and George “won’t hurt” Republicans in 2020. “Now, people are saying, ‘They’re going to put women in jail.’ Absolutely not,” King said. “But doctors who insist on continuing to abort little people in the womb will have to answer, because the doctors themselves medically know that that is a person. That is a human being. Ultrasound shows that to all of us, now, and science has caught up with us.” King said, “    Alabama’s new abortion law “is not to punish women,” stated King, “but it is to stop and give the baby civil rights. So women won’t be hauled off to jail.” King reflected on her own experiences with abortion in describing the pro-life movement’s commitment to protecting children and not punishing mothers. “I had abortions years ago,” said King, “and I said, ‘If you really start jumping on the women, you’ll probably want to come after me, but he Lord has forgiven me.’ We’re not going on a headhunt for women with the law in Alabama.” King affirmed that these pro-life laws are aimed at “making sure women and babies are protected.”  .....
“The objective is to give the babies civil rights, to protect and to help the mothers, and then to strengthen the family. That is the goal. It’s not too harsh. It’s not too much. It’s not too extreme.” King went on, “People say, ‘Well, what about rape?’ Well, two wrongs don’t make a right. You kill an innocent person and do further harm the woman, but you don’t deal with the person that did it. All of that has to be examined.”
Excerpts from Breitbart news interview
Posted by Jesus Caritas Est at 10:28 AM