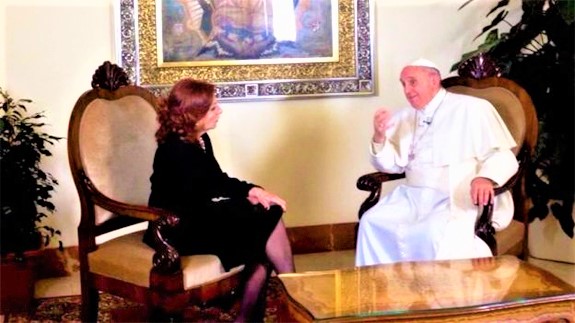 Pope interview addresses violence against women and more
In a wide-ranging interview with Mexican media network Televisa, Pope Francis responds to a series of questions concerning his pontificate and the state of the world.
By Vatican News

Mexican journalist and writer, Valentina Alazraki, has been the Vatican correspondent for Televisa since 1974. In an exclusive interview, published on Tuesday, she asks Pope Francis questions ranging from abortion to migration.

Building bridges not walls
One of the first questions regards the border wall with Mexico. Pope Francis responds by repeating what he has always said, namely that “whoever builds walls ends up a prisoner of the walls he builds... Instead, those who build bridges make friends, shake hands, even if they stay on the other side... But there is dialogue”, he says.

Young people
Turning to the subject of young people, the Pope warns of how youth risk “losing their roots”. He confirms his advice “for young people to talk to old people, and the old to talk to the young, because... a tree cannot grow if we cut off its roots”. The Pope encourages youth to “dialogue with the roots, receive culture from the roots. Then you grow, you bloom and you bear fruit”.

Violence against women
The Pope also addresses the issue of violence against women. Without attempting to give what he calls “a sociological explanation”, the Pope does say that “women are still in second place” and, often, being in second place can mean “to be the object of slavery”. Here he gives the example of prostituted women and speaks of his own visit recently to a rescue shelter in Rome. The Pope goes on to praise the role of women, saying “the world without women doesn't work”.

Relationship with the media
In the interview, Pope Francis responds to a question regarding his relationship with the media: “I feel comfortable”, he says, “I tell you the truth, don't I?” The Pope admits that, sometimes, “the questions may be more difficult to answer”, but he thanks journalists for their patience. “Some questions have made me think”, he continues, giving the example of the trip to Chile when journalists asked him about alleged cases of sexual abuse in the country. “It was largely some of the questions asked with much respect on the return trip”, he said, that helped him realise he had not been adequately informed on the subject. The Pope says that when he returned to Rome, he “thought, prayed, asked for advice and decided to send an Apostolic Visitor, who uncovered what I did not know”. And that “was a help”, said the Pope.

The McCarrick case
The interview also touches on communicating information and the need to clarify matters to both the press and people in the pew. Here Pope Francis confirms how “we have to explain”, especially when it is a question of “presumption of innocence. The McCarrick case was different, says the Pope, because “it was obvious”. Which is why he was able to “cut to the chase before the trial” and remove McCarrick from both the cardinalate and the clerical state.

The Viganò case
The interview continues with a question about the Pope’s silence over unanswered accusations by former Nuncio, Archbishop Carlo Maria Viganò. “Those who made Roman law say that silence is a way of speaking”, he begins. He also says that, in the case of Viganò, he made a choice to trust the honesty of the journalists: “I said to them: "Look, you have everything, study for yourselves and draw the conclusions… And the result was good, it was better than if I started to explain, to defend myself”. Pope Francis confirms he knew nothing about McCarrick: “I said that several times, that I didn't know, no idea… otherwise I wouldn't have kept quiet”. He again explains his silence, saying “firstly the evidence was there for you to judge”, and secondly because of the example of Jesus: “in moments of viciousness you can't speak, because it's worse. Everything is going to go against you. The Lord taught us that way and I follow it”.

Migrants and refugees
The Pope also answers questions about migrants and refugees, something he calls a top priority in today’s current world scenario. “The phenomenon of migration is such that  I have taken in my hands the Migrants Section of the Vatican Dicastery for Promoting Integral Human Development,” he says, because every day we receive news of more deaths in the Mediterranean. Pope Francis comments on the problems that arise from some political leaders enforcing policies that close ports of entry, obliging boatloads of migrants and refugees to return to dangerous waters. He reiterates his belief that not only must we have the heart to “welcome”, but that we must follow up with the unique process of “accompaniment, promotion and integration”.

Pope Francis acknowledges that not all countries are able to follow up on that process, but he invites leaders to take into consideration how far they are able to do so, and that requires both dialogue and agreement, he says.

The Pope also mentions the reality of humanitarian corridors as a positive response to the global emergency. He gives the example of Sweden, “because during the dictatorships in the 1970s in Argentina and in Latin America, the so-called ‘Operation Condor’ worked very well”. Pope Francis explains that thanks to that project, Sweden received many Latin American refugees. They were welcomed, given language training, temporary housing and help in seeking employment. Sweden was able to do this, he says, although today it is harder because of the numbers. However, he says, the system has worked, pointing to some of the children of those migrants who today are government ministers.

Pope Francis goes on to speak about how when countries make political agreements and set boundaries, migrants  - who are the weakest and most vulnerable – are the ones who suffer and often end up being trafficked, enslaved, tortured…

He also speaks of the need for security for those who are repatriated: “In order to repatriate we need dialogue with the country of origin; not simply build a wall or close the doors of the house”.

Why does the Pope care so much about migrants today and talk so much about migrants? “Because it is a burning problem”, he says, underscoring how he also continues to talk about life, protecting life, and against abortion about which he reminds the interviewer, he has said “some very hard, very hard things.”

Abortion
On the subject of abortion, the Pope says, he always asks two very clear questions: “Is it fair to eliminate a human life in order to solve a problem?”. The answer to which is: no. “Second question: is it fair to pay a sniper to solve a problem? No. Abortion is not a religious problem in the sense that just because I am Catholic I must not seek an abortion. It is a human problem”, says Pope Francis. “It is a problem of eliminating a human life. Period”.

Relationships with governments
In the interview, the Pope refers to how, during his travels, he sometimes finds himself in situations in which political leaders may be champions of policies with which he disagrees. Pope Francis says he always strives for dialogue and for the best possible outcome. In his speeches, he says, he touches generically on what may be the problems of a country, but in private, he takes another step, always making the effort to give encouragement in achieving good. “I find something good in everyone”, he says, “be it good will, also in non-believers, they always do something good”, he says, reminding the journalist that it is never good or profitable to speak badly of others.

For the first time, the Pope reveals that "Don’t speak badly of others” is the title of a pamphlet he has had distributed in the Roman Curia in the Vatican. “Gossip is a universal defect and it applies to everyone”, he says, “to rulers, non-rulers, children, young people, men, women, everyone. They say that women are more gossipy: rubbish! Men are also gossips”, says the Pope.

Another question in the interview focusses on possible controversies deriving from gestures and words spoken privately to individuals such when as the Pope embraced a transsexual person and his partner whom he received at the Casa Santa Marta, or his words to a divorced Argentinean woman over the telephone in which he reportedly said she could receive Communion.

'Irregular' situations
“Sometimes people, because of the enthusiasm of being received (in audience), say more things than the Pope said, let's take that into account”, explains Pope Francis. Still, he adds, we are all children of God, and no one must be discarded. “I can't tell a person that his or her behavior is in line with what the Church wants, (…) but I do have to tell them the truth: 'You are a child of God and God wants you that way, settle it with God'”, he says. God loves all of his children, continues Pope Francis. Specifically regarding the lady from Argentina, the Pope says he does not remember exactly what he said to her: “I must have told her: 'look in ‘Amoris laetitia’, it tells you what you have to do’”.

Homosexuality
Underscoring his belief that we are all God’s children, the Pope reiterates his stance regarding the fact that families must love and include all of their children, including those who are homosexual. He vehemently denies ever having said homosexuals are in need of a psychiatrist. But, he adds, that “doesn’t mean I approve homosexual acts, far from it”.

Finally, Pope Francis clarifies his famous quote: “Who am I to judge?”.  He made the comment during an inflight presser while returning from Rio de Janeiro soon after becoming Pope. The comment seemingly raised a lot of expectation within the global homosexual community that allegedly hoped he was going to go further. In the interview with Televisa, Pope Francis notes that Catholic doctrine has not changed. Rather, he warns against the temptation to take words out of context, and as far as doctrine is concerned, he defines himself as a “conservative”.