Pope Francis "It is the mystery of Jesus-the Eucharist, seed of new life for all humanity." Full Text + Video 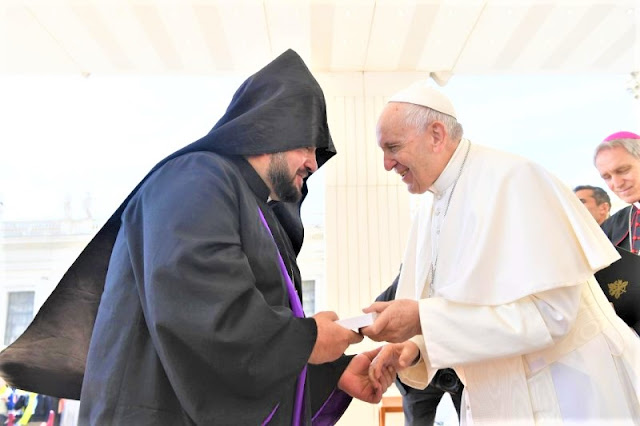 Catechesis on the Apostolic Journey to Bulgaria and Northern Macedonia

I returned yesterday, late in the evening, from a three-day apostolic journey that took me to Bulgaria and Northern Macedonia. I thank God for allowing me to make these visits, and I renew my gratitude to the civil authorities of these two countries who have welcomed me with great courtesy and availability. My most cordial "thanks" go to the Bishops and their respective ecclesial communities, for the warmth and devotion with which they accompanied my pilgrimage.

In Bulgaria I was guided by the living memory of St. John XXIII, who in that country was sent in 1925 as Visitor and then Apostolic Delegate. Animated by his example of benevolence and pastoral charity, I met that people, called to act as a bridge between Central, Eastern and Southern Europe; with the motto "Pacem in terris" I invited everyone to walk on the path of fraternity; and in this way, in particular, I had the joy of taking a step forward in the meeting with the Patriarch of the Bulgarian Orthodox Church Neofit and the members of the Holy Synod. In fact, as Christians, our vocation and mission is to be a sign and instrument of unity, and we can be, with the help of the Holy Spirit, putting what unites us before what has divided us or still divides us.
Present-day Bulgaria is one of the lands evangelized by Saints Cyril and Methodius, which Saint John Paul II has added to Saint Benedict as Patrons of Europe. In Sofia, in the majestic Patriarchal Cathedral of Sant’Aleksander Nevkij, I paused in prayer before the sacred image of the two holy brothers. They, of Greek origin, from Thessaloniki, were able to use their culture with creativity to transmit the Christian message to the Slavic peoples; they created a new alphabet with which they translated the Bible and the liturgical texts into the Slavic language. Even today there is a need for passionate and creative evangelizers, so that the Gospel may reach those who do not yet know it and can irrigate the lands where the ancient Christian roots have dried up again. With this in mind, I celebrated the Eucharist twice with the Catholic community in Bulgaria and encouraged it to be hopeful and generative. I thank again those people of God who have shown me so much faith and love.

The last act of the trip to Bulgaria was carried out together with the representatives of the different religions: we invoked the gift of peace from God, while a group of children carried torches lit, a symbol of faith and hope.

In Northern Macedonia I was accompanied by the strong spiritual presence of Saint Mother Teresa of Calcutta, who was born in Skopje in 1910 and there, in her parish, received the sacraments of Christian initiation and learned to love Jesus. In this petite woman but full of strength thanks to the action of the Holy Spirit, we see the image of the Church in that country and in other outskirts of the world: a small community that, with the grace of Christ, becomes a welcoming home where many find refreshment for their life. At the Mother Teresa Memorial I prayed in the presence of other religious leaders and a large group of poor, and I blessed the first stone of a shrine dedicated to her.

Northern Macedonia has been an independent country since 1991. The Holy See has tried to support its path from the beginning and with my visit I wanted above all to encourage its traditional ability to host different ethnic and religious affiliations; as well as his commitment to welcoming and helping large numbers of migrants and refugees during the critical period of 2015 and 2016. There is a great welcome, they have a big heart. Migrants create problems for them, but they welcome them and love them, and problems solve them. This is a great thing about this people. A round of applause to this people.
A young country, Northern Macedonia, from an institutional point of view; a small country in need of opening up to broad horizons without losing its roots. This is why it was significant that the meeting with young people took place there. Boys and girls of different Christian denominations and also of other religions - Muslims, for example -, all united by the desire to build something beautiful in life. I urged them to dream big and get involved, like the young Agnese - the future Mother Teresa - listening to the voice of God who speaks in prayer and in the flesh of needy brothers. I was struck when I went to visit the Sisters of Mother Teresa: they were with the poor, and I was struck by the evangelical tenderness of these women. This tenderness is born of prayer, of adoration. They welcome everyone, they feel like sisters, mothers of all, they do it with tenderness. Many times we Christians lose this dimension of tenderness, and when there is no tenderness, we become too serious, acid. These sisters are sweet in tenderness and do charity, but charity as it is, without disguising it. Instead, when we do charity without tenderness, without love, it is as if we throw a glass of vinegar on the work of charity. No, charity is joyful, it is not acid. These sisters are a beautiful example. May God bless them all.

In addition to the testimonies of the young, in Skopje I listened to those of the priests and consecrated persons. Men and women who gave their lives to Christ. For them, sooner or later, the temptation comes to say: "Lord, what is this little gift of mine in the face of the problems of the Church and the world?" So I reminded them that a bit of yeast can make all the dough grow, and a little bit of perfume, pure and concentrated, smells good around the whole environment.

It is the mystery of Jesus-the Eucharist, seed of new life for all humanity. At the Mass that we celebrated in the Skopje square, we renewed, in a periphery of today's Europe, the miracle of God who, with a few loaves and fish, broken and shared, satisfied the hunger of the multitudes. To his inexhaustible Providence we entrust the present and the future of the peoples I visited on this journey. And I invite you all to pray to Our Lady to bless these two countries: Bulgaria and Northern Macedonia.

I warmly welcome the Italian-speaking pilgrims.

I am pleased to welcome the Capitulars of the Capuchin Tertiaries; the new Priests of the Legionaries of Christ, with their families; and the teachers and students of the Pontifical University "Regina Apostolorum" of Rome, on the 25th anniversary of its foundation.

I greet the parish groups; educational institutions, in particular the "Leonardo da Vinci" high school in Pescara and the Highlands Institute in Rome; the delegation of the "Campana della Pace" of Vigo di Fassa, that of Cisco Italia; and that of the Meter Association, committed against the exploitation of children.

I am particularly interested in young people, the elderly, the sick and newlyweds. Today the Supplication to the Madonna of Pompeii occurs. We are in spiritual union with those in that Marian Shrine, as elsewhere, will meet at noon to recite with faith the Supplication to Our Lady, so that she turns her gaze on the world and intercedes for the whole Church and for those who suffer in body and spirit .

And also today, in my homeland, the Solemnity of Nuestra Señora de Luján is celebrated. We all pray together for Argentina.
Posted by Jesus Caritas Est at 6:14 PM