Pope Francis to Christian Schools " Looking to the Divine Master, you can more generously work in the service of the new evangelization..." Full Text 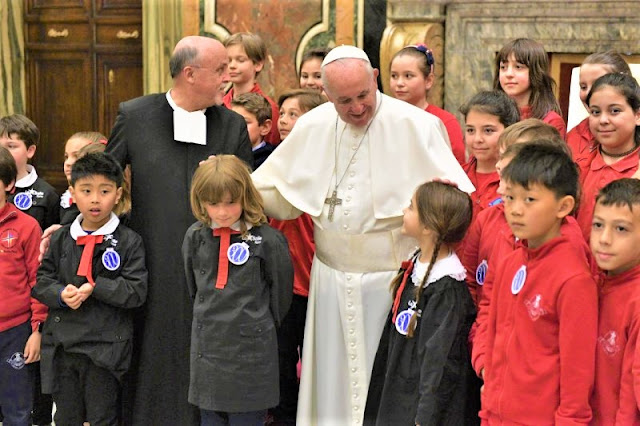 SPEECH OF THE HOLY FATHER FRANCIS


TO THE COMMUNITY OF THE BROTHERS OF THE CHRISTIAN SCHOOLS

I welcome you who represent the entire spiritual family founded by St. John the Baptist de La Salle, on the occasion of the third centenary of his death. I greet and thank Brother Robert Schieler, Superior General; I address my greeting with affection to each one of you and I would like you to reach all the Brothers of the Christian Schools who work in the Church with generosity, competence and faithful adherence to the Gospel. This important anniversary of your Founder is a favorable occasion for your Institute to highlight the figure of a pioneer in the field of education, who conceived an innovative educational system in his time. His example and testimony confirm the original timeliness of his message for today's Christian community, illuminating the way forward. He was a brilliant and creative innovator in the vision of the school, in the conception of the teacher, in teaching methods.

His vision of the school led him to develop ever more clearly the persuasion that education is a right for everyone, including the poor. For this he did not hesitate to give up the canonry and his rich family legacy, to devote himself entirely to the education of the lower social class. He gave life to a community of only laity to carry out his ideal, convinced that the Church cannot remain alien to the social contradictions of the times with which it is called to confront. It was this conviction that led him to establish an original experience of consecrated life: the presence of religious educators who, without being priests, interpreted in a new way the role of "lay monks", totally immersing themselves in the reality of their time and thus contributing to progress of civil society.

The daily contact with the world of school matured in him the awareness of identifying a new conception of the teacher. He was convinced, in fact, that school is a serious reality, for which people need to be adequately prepared; but he had before his eyes all the structural and functional deficiencies of a precarious institution that needed order and form. He then realized that teaching cannot be just a job, but a mission. He therefore surrounded himself with people suited to the popular school, inspired by Christianity, with attitudinal and natural qualities for education. He devoted all his energy to their formation, becoming himself an example and model for them, who had to exercise a service at the same time ecclesial and social, and working hard to promote what he called the "dignity of the master".

In order to give concrete answers to the demands of his time in the field of school, John  Baptiste de La Salle undertook bold reforms of teaching methods. In this he was moved by an extraordinary pedagogical realism. He replaced the French language with the Latin one, which was normally used in teaching; divided pupils into homogeneous learning groups for more effective work; set up Seminars for country masters, that is, for young people who wanted to become teachers without becoming part of any religious institution; he founded the Sunday Schools for adults and two Pensioners, one for young delinquents and the other for the recovery of prisoners. He dreamed of a school open to all, so he did not hesitate to face extreme educational needs, introducing a method of rehabilitation through school and work. In these formative realities he started a corrective pedagogy which, in contrast with the use of the times, brought study and work among the young as punishment, with craft activities, rather than the mere cell or lashes.

Dear spiritual children of John Baptist de La Salle, I urge you to deepen and imitate his passion for the last and the rejected. In the wake of his apostolic witness, you are the protagonists of a "culture of resurrection", especially in those existential contexts where the culture of death prevails. Do not get tired of looking for those who are in the modern "tombs" of loss, degradation, discomfort and poverty, to offer new life hope. The impetus for the educational mission, which made your Founder a teacher and witness for so many of his contemporaries, and his teaching, can still today feed your projects and your action.
His figure, always so timely, constitutes a gift for the Church and a precious stimulus for your Congregation, called to a renewed and enthusiastic adherence to Christ. Looking to the Divine Master, you can more generously work in the service of the new evangelization in which the whole Church is engaged today. The forms of the proclamation of the Gospel require to be adapted to the concrete situations of the different contexts, but this also entails an effort of fidelity to the origins, so that the apostolic style that is proper to your religious Family can continue to respond to people's expectations. I know this is the commitment that drives you and I urge you to walk with courage in this direction.

May you carry out your mission among the younger generations with renewed vigor, with that reforming boldness that characterized John Baptist de La Salle: he announced to all the Gospel of hope and charity. May the Holy Virgin always support you and obtain abundant apostolic fruits for you.

Dear brothers and sisters, I thank you for all that you do in the field of education. I accompany you with prayer and my blessing. And I ask you to please pray for me. Thank you!