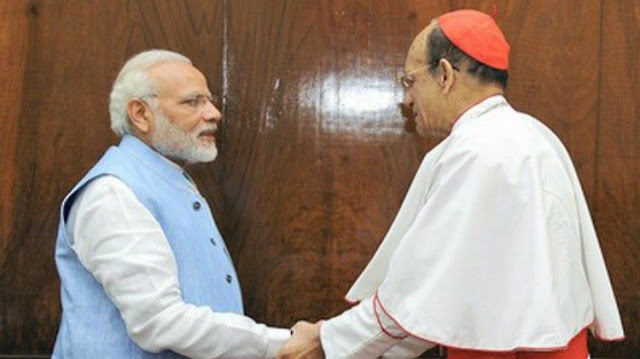 ASIA/INDIA - Cardinal Gracias: "Let us work for a new, strong and inclusive India" Monday, 27 May 2019 New Delhi (Agenzia Fides) - "On behalf of the Catholic Church in India, I offer my sincere congratulations to you and to the Bharatiya Janata Party. I want to assure you of our prayers and best wishes for you and your team as you lead our country in building a strong and inclusive India": this is what Cardinal Oswald Gracias states in a letter addressed to the Prime Minister, Narendra Modi, winner of the recent general election. As Fides learns, Cardinal Gracias, president of the Indian Bishops' Conference, Archbishop of Bombay, the largest diocese in India, sent the letter on May 25, pointing out that the Indian people gave "a clear mandate for a stable and effective government". The Cardinal also congratulated Amit Shah, president of the Bharatiya Janata Party, who played the key role in the electoral victory, ensuring the prayer of the Catholic community "for health, wisdom and strength to carry out the great responsibilities entrusted to him".
The Church, the text adds, intends to collaborate with the government to create "a new India": "We are all eager to work together for the vision of a new India which gives hope and energy to our youth, empowers our women especially in rural areas, opens new and sustainable opportunities for our farmers and strengthens our economy while leaving no one behind: a new India that enjoys peace and prosperity and continues to make progress". The results of the Indian general elections, held in seven phases from 11 April to 19 May, were announced on 23 May. Modi's alliance led by the Bharatiya Janata Party won 353 seats out of the 543 of Lok Sabha, the lower House of parliament. Modi's commitments include "liberating India from poverty, dirt, corruption, terrorism, casteism and communalism by 2022". (SD-PA) (Full Text Source: Agenzia Fides, 27/5/2019)
Posted by Jesus Caritas Est at 11:28 PM

Real Hypocrites. Before the election they say Don't vote for the BJP let's bring in a secular government and now that Modi led BJP government won they go on congratulating them. Real Hypocrites and double standards players are our church leaders. So also the Cardinal.

Dear Unknown, India is a democratic country and the ruling government is the government of ALL, those who voted for them and also those who did not vote for them. As a law abiding citizen who loves the country, one should support and contribute for the development of the nation, wish and pray for the good of the nation irrespective of one's political ideologies ...Well that is what this post was about...

Well said in a very humble and polite way

Don't talk shit if you do not understand.

People were asked to excercise their right judiciallly. Nobody pointed to vote for any party or not

Everyone has a right to support any party and also has a right to congratulate a victorious party. You sound like a dickhead who doesnt knw an essense of democracy.

Really looking forward with great expectation from this government.
Our economy is really in very bad shape. Big Challenge to this government & as a good citizens our prayers are always with them.

Binoy Joseph very well said in a nutshell.I wish we could all think like this and move on to supporting one another for a strong secular India.