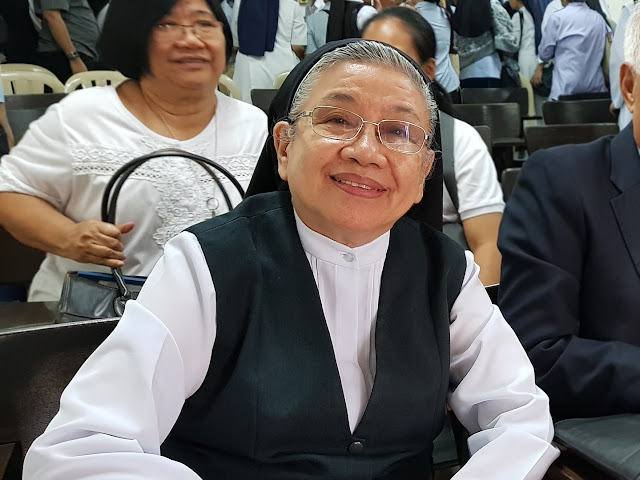 Sister Crescencia “Cres” Lucero, a known human rights defender, has died on Wednesday. She was 77.

Sr. Lucero, a missionary from the Franciscan Sisters of the Immaculate Conception, died after suffering a stroke the week before.

The nun was attending a convention on human rights with Forum-Asia in Jakara, Indonesia when she had a stroke, which caused cerebral hemorrhage.

She was rushed to Gatot Soebroto Army Hospital where she underwent surgery the following day.

Sr. Lucero was a long-time advocate for the oppressed and marginalized, and a fighter for human rights, peace and justice in the Philippines.

For many years, she led the Task Force Detainees of the Philippines as chairperson of the Justice, Peace and Integrity of Creation Commission of the Association of Major Religious Superiors in the Philippines (AMRSP).

She was also part of the Forum-Asia family for a long time, including serving as a member of the executive committee.

“We cannot express what a loss the passing of Sister Cres is for the human rights movement in the Philippines and in the rest of Asia,” the Forum-Asia said.

“We can only commit ourselves to continuing her struggle, and honor her by standing with, for and behind the grass-roots communities that she so wholeheartedly supported,” it added.

The AMRSP said Sr. Lucero was an inspiration for all those working for human rights and ecological advocacies.

“Her passing away is big loss for us, for the Church, and for our country especially in this dark time of our society,” said Fr. Angelito Cortez, AMRSP coexecutive secretary.

Sr. Lucero’s remains is expected to arrive in Manila on late Friday night or early Saturday morning.
FULL TEXT Release from CBCP News of the Bishops of the Philippines