180,000 People at Vigil in Hong Kong Remembering Martyrs of Tiananmen Square after 30 Years 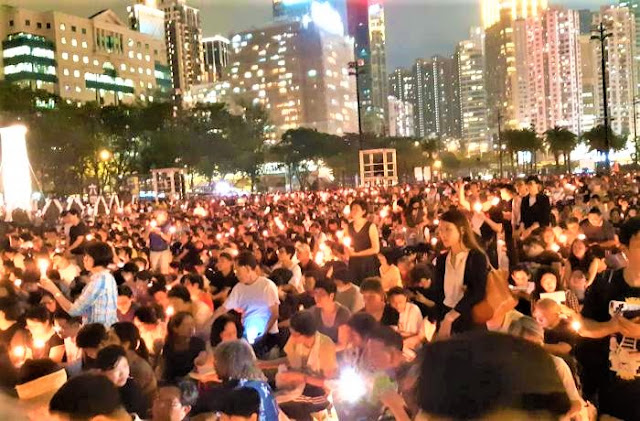 According to the authorities, at least 180,000 people have filled Hong Kong’s Victoria Park to remember the martyrs.

Although the exact number of victims has never been established because of Beijing’s heavy-handed censorship, some estimates put it at about 2,000 people, mostly young people, mowed down by troops or crushed by army tanks.

What is Tiananmen Square?
Overnight on 3-4 June 1989, the tanks sent by paramount leader Deng Xiaoping crushed protesters who for weeks had been demanding greater freedom and a democratic shift in the country.

The number of deaths has never been established due to government censorship. Their families have been ostracised ever since, whilst the authorities have denied that the protest movement was pro-democracy.
Most of the victims were workers and students who had gathered in the capital to commemorate the late Communist Party Secretary Hu Yaobang, who had been in favour of reform.
A pro-democracy rally is organised in Hong Kong every year to mark the occasion, commemorate the victims, and reiterate their demands vis-à-vis the Chinese government.
Local religious leaders also took part in the event, held at Victoria Park. Card Zen, bishop emeritus of Hong Kong, usually celebrates a Mass and walks with the protesters.
Edited from Asia News IT
Posted by Jesus Caritas Est at 1:44 PM