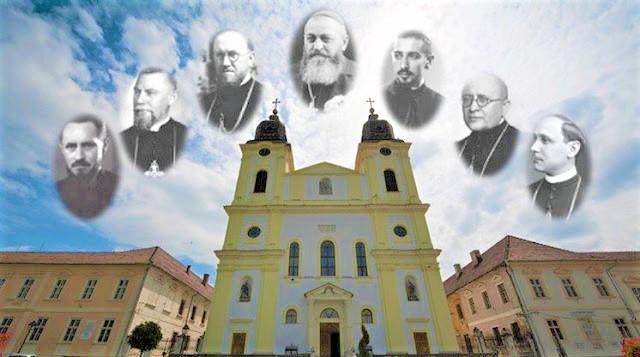 Pope Francis beatifies seven Greek- Catholic bishops who were martyred under the communist regime in Romania.
By Vatican News

All seven of the Greek-Catholic bishops were arrested in 1948. All of them were imprisoned and left to die of hunger, exposure, disease, or the effects of hard labour, and then buried in unmarked graves. The liturgical chair used during the Divine Liturgy in Blaj on Sunday, was made from the wooden planks of the prison beds, and from the iron bars of the prison windows where some of the martyrs died.

Iuliu Hossu
Romania was under Soviet occupation and ruled by Nicolae Ceausescu, when Iuliu Hossu returned there after completing his theology studies in Rome. He spent 22 years in prison. His last words were: "My battle is over, yours continues". He never knew that Pope Paul VI had created him a Cardinal "in pectore" in 1969.

Vasile Aftenie
Vasile Aftenie also studied in Rome. A year after his arrest he was transferred to the infamous Ministry of the Interior where he suffered terrible tortures and eventually died of his wounds in 1950.

Ioan Balan
In 1929 Ioan Balan was appointed to the Vatican Commission to draw up the new Code of Canon Law of the Eastern Churches. After his arrest in 1948, he was placed in solitary confinement and died in 1959 without ever being tried or sentenced.

Ioan Suciu
Ioan Suciu was ordained a priest in 1931. He too died of hunger and disease while in prison. In his last letter to the faithful before his arrest, he wrote: “Do not be deceived by vain words, promises, lies... We cannot sell Christ or the Church”.

Tito Liviu Chinezu
Tito Liviu Chinezu was born in 1904. He was ordained a bishop in prison by those bishops who were themselves prisoners. When the secret of his ordination leaked out, he was transferred to a prison where he died of cold and hunger.

Alexandru Rusu
Alexandru Rusu was consecrated bishop in 1931. Arrested in 1948, he was sentenced to 25 years in prison for instigation and high treason. He died in 1963 and was buried in the prison cemetery without any religious rite.

Vatican Radio
From the night of the 28 November 1948, when all the Greek-Catholic bishops were arrested, until the 25 December 1989, which marked the end of the Communist regime, the only Divine Liturgy in the Romanian language available to the faithful in that country, was that broadcast by Vatican Radio.
Full Text Source from VaticanNews.va - Image source: Google Images - Oculus News
Posted by Jesus Caritas Est at 10:32 AM