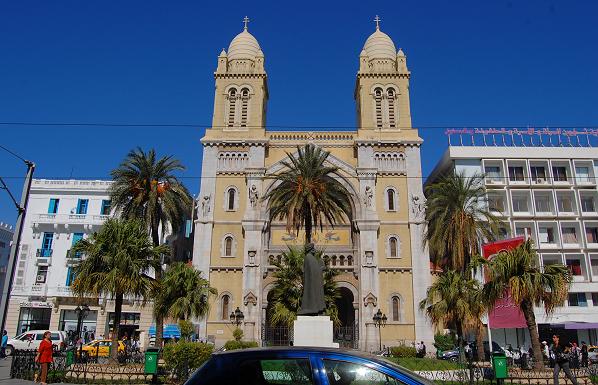 AFRICA/TUNISIA - "I am confident: Tunisians will be able to react with strength and courage" says the Archbishop of Tunis
Friday, 28 June 2019 bishops   terrorism

TUNISIA
2019-06-28
"I am confident: Tunisians will be able to react with strength and courage" says the Archbishop of Tunis
Tunis (Agenzia Fides) - "We distinctly heard the explosion that took place 200 meters from the Cathedral", says to Agenzia Fides His Exc. Mgr. Ilario Antoniazzi, Archbishop of, where a suicide bomber detonated explosives yesterday, June 27 next to a police vehicle, killing a policeman and injuring 8 others along Avenue Habib Bourguiba. Another bomber blew himself up at the entrance to the Gorjani security complex, on the outskirts of the capital, injuring 4 people. Both attacks were claimed by ISIS.
"I was impressed by the reaction of the people. There was no hysteria. The police promptly intervened and removed those present. Within three quarters of an hour the whole area of the attack was empty", says Bishop Antoniazzi.
The site of the attack has a highly symbolic value, 200 meters from the Cathedral which is located in front of the French Embassy. A little further on, about half a kilometer away, there is the Ministry of the Interior. Furthermore, as pointed out by Mgr. Antoniazzi, "half way from where the attack occurred, the Medina, the old city of Tunis" begins, a place of strong tourist attraction.
"On the evening before the attack, there were dozens of tourist buses on the Avenue Habib Bourguiba. I said to myself: thank God, tourism is returning to Tunisia. Tourism is essential for us", says Mgr. Antoniazzi.
"We hope that yesterday's attacks will not have a negative influence", said Mgr. Antoniazzi, who says he is confident that the Tunisians will be able to react. "Tunisia - he says - has accustomed us to surprises. I think we will have a nice surprise in the face of Tunisia's reaction to this. It is not the first time that Tunisia has been hit by terrorists, but has always known how to react with strength and courage. Without being a prophet, I am optimistic, in spite of everything. I trust the Tunisian people who want to live in peace and build their own Country", concludes the Archbishop. (L.M.) (Full Text Release by Agenzia Fides, 28/6/2019) - (Image Share from Google images of Tunis St. Vincent de Paul Catholic Cathedral in Tunisia - Est. 1897)
Posted by Jesus Caritas Est at 12:51 PM

GOD BLESS ALL WHO GOT HURT AND DIED, INCLUDING THE SUICIDE BOMBER. GOD PROTECT TUNISIA & HELP TERRORIST TO CONVERT TO DO GOOD.