#BreakingNews Crowds at Shrine of St. Anthony for reopening in Sri Lanka after Easter Attack which left 54 Dead 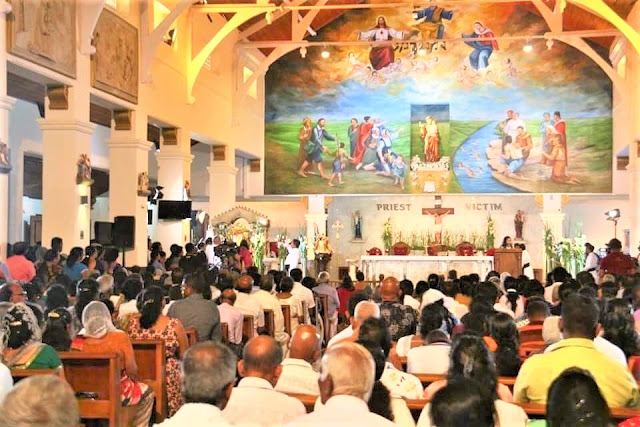 St Anthony's Shrine reopens after the Easter Sunday attack
by Melani Manel Perera
The Sri Lankan Navy repaired the church after a suicide bomber killed 54 people, who are already saints, according to Archbishop Ranjth. The shrine is now open from 6 am to 8 pm.


Colombo (AsiaNews) – The St Anthony's Shrine in Kochchikade, near Colombo, one of the three churches attacked on Easter Sunday, reopened to the public today following a blessing last night and a Mass this morning.

During both services, which Card Malcolm Ranjith, archbishop of Colombo, led, the faithful rejoiced at going back to the place of worship after almost two months, conscious of the losses, the 54 people who were killed.

For the prelate, those who died in the attacks are saints. “We will remember them every day. We will not forget their loved ones. Every cent we collect will go for their welfare of these families.”

The 21 April massacres in three churches and three luxury hotels in the capital left 257 people dead and over 600 wounded. Although the Islamic State group claimed responsibility, the government believes the National Thowheed Jamath group, a Sri Lankan group, was involved.

Since then, some observers have noted some connection between government and Islamic radicalism, which has existed on the island for years but was mostly ignored for electoral reasons.

The Sri Lanka Navy carried out the repair work at the shrine after cordoning it off and stabilising the damaged building. As of today, the church will be open from 6 am to 8 pm.

"There is nothing more valuable than a human life,” said Card Ranjith in last night's blessing. “Therefore no one has the right to snatch away another’s life. Every human life is equally valuable.

“We completely reject the use of human life to achieve political goals. There is no place in heaven for those who carried out the attacks. They will only go to hell,” he added.

Among religious leaders, the cardinal is one of the government’s harshest critics over its handling of the attacks.  Last night he complained again that survivors, the wounded and victims’ families live in confusion.

Satan will not win over God's people no matter how much he rages...thank you Lord for restoration