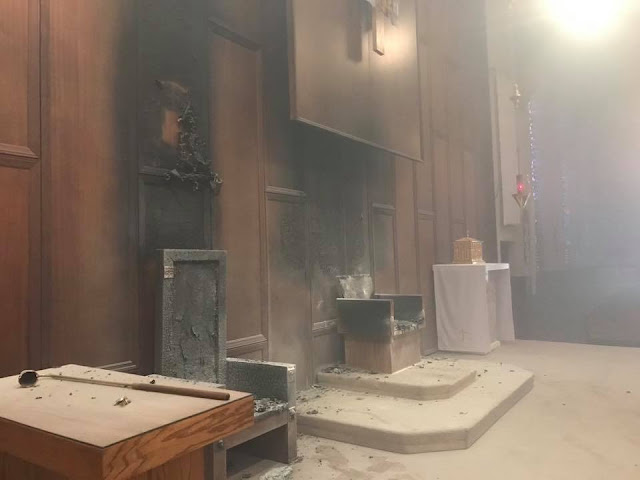 On Wednesday, June 5, 2019 the fire in the Cathedral was discovered. Darha Nixon, the church’s business manager, fought the fire with a chemical fire extinguisher that scorched much of the wall.

Tallahassee police reports noted the innards of the church was full of smoke and that three chairs — including the bishop’s cathedra — were burned. On top one of the chairs was a burned Bible.

Thankfully, the fire was caught in time and didn’t spread to other parts of the cathedral. No injuries were reported.

Bishop William A. Wack, of the Diocese of Pensacola-Tallahassee, released a statement about the June 5 fire:

“Today, there was a fire inside the Co-Cathedral church in Tallahassee. The cathedra and presiders’ chairs were set on fire and are destroyed. The walls of the sanctuary are charred, and there is smoke damage. Thankfully, no one was hurt, and it went out before igniting the whole building. An investigation is underway. Thank you for your prayers.”

Officials are calling the St. Thomas More fire arson and investigations are ongoing.

On May 23, Bishop Wack released a video message as a “State of Diocese” address marking his 18-month tenure of the diocese during which he has visited all of the parishes and missions of the 18-county diocese within Florida’s Panhandle  — save two chapels, which he said he hoped to visit soon. In the video, he spoke about the challenges of the local church, specifically the impact of Hurricane Michael, which he described as the “four-hour storm” that created an enormous amount of devastation that will take more than just a few months or a year from which to recover.

“We’re rebuilding thanks be to God and insurance, but it will take time, so we need patience,” he said. “I know we will fully recover in the months and years ahead.”


The Diocese of Pensacola-Tallahassee Diocese is a “dual see” diocese that has two centers from which the bishop governs: Pensacola and Tallahassee. Each see city has a cathedral — the Cathedral of the Sacred Heart in Pensacola and the Co-Cathedral of St. Thomas More in Tallahassee. The diocese spans 14,044 square miles and has a total Catholic population of 63,256.

Edited from the Source: thefloridacatholic
Posted by Jesus Caritas Est at 2:29 PM