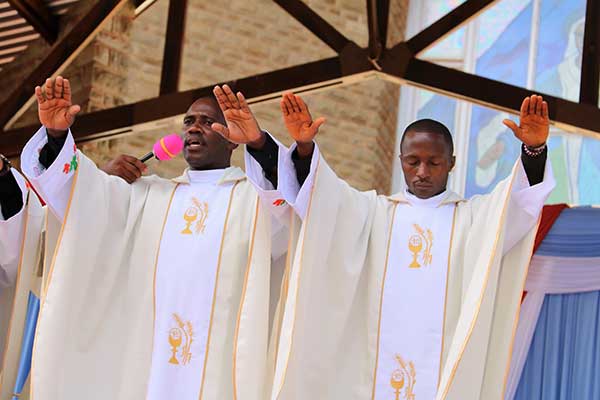 Nairobi (Agenzia Fides) - A Catholic priest was killed in Kenya. Fr. Eutycas Murangiri Muthur, of the parish of Limbine, diocese of Meru, county of Tigania, was stabbed to death by one or more individuals at about 1.30 am on June 4th, in Makutano, at about 200 km from the capital, Nairobi. The circumstances of the killing are not clear but the police arrested a man and a woman who apparently were with Fr. Eutycas. Fr. Eutycas was 32 years old and was ordained on December 23, 2018. (L.M.) (Above Full Text from Agenzia Fides, 5/6/2019)
Kenya's Daily Nation reports:
The priest’s father, Mr Domiciano Muthuri, said the family and faithful of Nkabune Parish, where Fr Muthuri hailed from, were shocked. “He was a humble man who never indulged in bad things. We are really hurting,” he said. The priest had served in Meru County for about five months after being ordained on December 23, 2018.
Mr Muthuri, who visited the Nation's offices in Meru, said his son had been in the company of a personal friend, one Mr Kinoti, when he was attacked. “Eutycas went to the car and found someone inside. He demanded to know what he was doing in the vehicle but his friend took off instead of assisting him or raising the alarm," he claimed. "We were told he earlier walked outside the building with the car keys and could have opened it for the assailant."
The hotel's managers were not immediately available for comment as they were recording statements with police. Fr Muthuri's official car, a Toyota Khami, was towed to Meru Police Station to be dusted for finger prints. The body was taken to Meru Level Five Hospital mortuary.

Unknown said…
Very very sad news. May his soul Rest in peace. God give the strength to his family members to bear this great loss.
June 6, 2019 at 1:38 AM

Unknown said…
Very sad...Eternal rest grant unto him o LORD.and let perpetual light shine upon him.May He Rest In Peace.
June 6, 2019 at 2:34 AM

Unknown said…
May God's mercy be granted to Fr. E

Chrisanthie said…
Satan will never stop his attacks against the Catholic church, because the church is his arch enemy.
June 6, 2019 at 2:14 PM

Unknown said…
I entered a long comment. But it was disappeared and I cant write again.

Unknown said…
Dear God Almighty rebuke Satan the murderer of Fr Eutycas and grant all Your Holy Graces for Fr.Eutycas for Thy great glory and praise! Amen.
June 8, 2019 at 11:34 PM