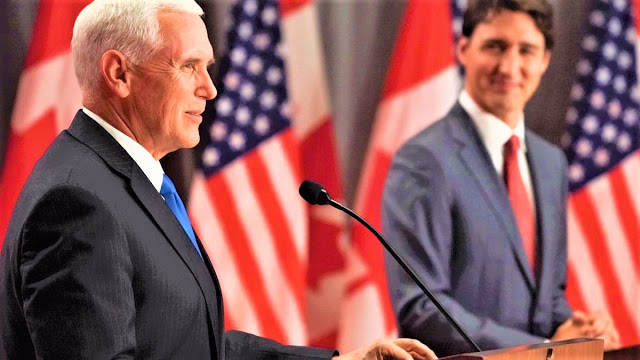 US Vice President Mike Pence traveled to Ottawa, Canada and had meetings with the Prime Minister Justin Trudeau
The Canadian PM Justin Trudeau and US VP Mike Pence were in Ottawa to discuss trade and other issues.
US Vice-President Mike Pence told the crowd and the PM he is "very proud to be part of a pro-life administration" after being pressed on the issue during his visit to Canada.
Mr Pence also said the Trump administration "we will always stand for the right to life". He explained "....our administration has taken steps to stand for the sanctity of life at home and abroad."

Canadian PM Justin Trudeau said the two men had a "cordial conversation" about abortion laws in the US despite their difference of views.

The PM and the VP also discussed issues related to trade and China.

In the US, the issue of abortion has been prominent this year as nearly a dozen states have moved to pass new, pro-life laws.

Mr Pence is known for his strong pro-life views and even spoke at the Washington Annual March for Life.

Mr Trudeau, on the other hand, denies his Liberal Party members their right to vote pro-life; thus infringing on their freedom of conscience.