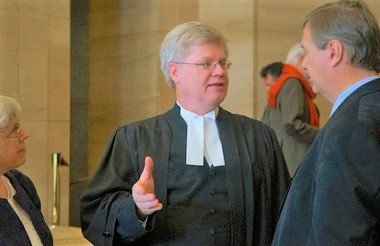 At the 2018 Conference of the Fellowship of Catholic Scholars (Canada) in Calgary, Alberta, lawyer Philip Horgan spoke on the Trinity Western decision. The Conference Theme was: Keeping Faithful to the Faith in a Post-Christian Society.
Philip Horgan, B.A. J.D., the President, Catholic Civil Rights League and Chair, Faith and Freedom Alliance, gave the following talk. (see video below) He spoke about the Trinity Western University decision, where the proposed law school, was refused accreditation. Law societies of Ontario and British Columbia refused to accept the possible law school graduates because the private, evangelical Christian university has a community covenant that prohibits sexual activity outside of traditional marriage.
Archbishop J. Michael Miller was disappointed with the Supreme Court of Canada's decision.
“I am saddened to see the Supreme Court of Canada’s Trinity Western University law school decision, with its potential to undermine freedom of religion, conscience, and association in Canada,” Miller said in a statement June 15, 2018.
Biography: Philip Horgan is a Toronto lawyer, in private practice. He works in the area of civil and constitutional litigation. He has maintained his own firm since 1996.
In his pro bono work, Phil has been actively engaged in a number of significant appellate and constitutional cases on human rights and fundamental freedoms on behalf of the Catholic Civil Rights League and the Faith and Freedom Alliance, including over 45 court interventions across the country, with more than 20 cases at the Supreme Court of Canada, including most recently Trinity Western (2018).
Mr. Horgan and his wife, Christine, have five children.
Other tidbits:
Title of Presentation:
Trinity Western 2018: The Turnover of Our Constitutional Order, and Possible Responses
Posted by Jesus Caritas Est at 9:12 AM