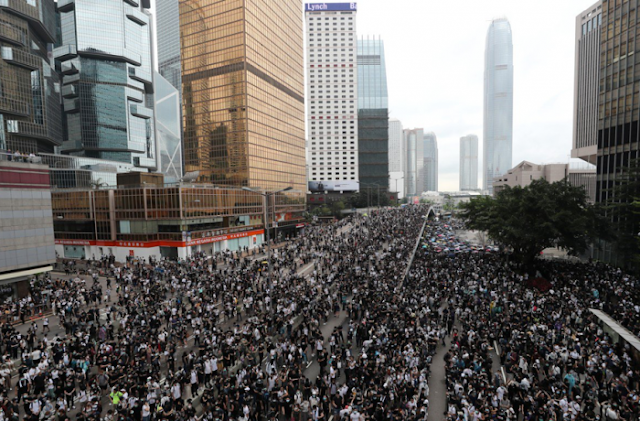 Apparent calm returns to Hong Kong after clashes and tear gas
by Paul Wang
The government has decided to again postpone the debate on the controversial extradition law today. Last night, the most violent episode in the territory in recent decades. At least 72 people, aged 15 to 66, were injured; two of them are in serious condition. In a video message, Carrie Lam, head of the executive, defends her position and accuses the youth of organizing a "revolt". Card Zen and Msgr. Joseph Ha in support of young people and for peace. Global condemnation and China’s response: "China's internal affair".
Hong Kong (AsiaNews) - This morning, the central districts of the island appear calm after yesterday's clashes and violence between police and protesters. The tens of thousands of demonstrators who surrounded the parliament building (Legco) until last night have gradually dissolved over the night. Some government offices are still closed today, as are shopping centers near the Legco and the Admiralty metro station. The government has decided to again postpone the discussion of the controversial extradition law.

Yesterday's demonstrations, which were attended by tens of thousands of people, mostly young people, wanted to put pressure on the Legco to cancel the extradition law, discussed for yesterday, which would allow the transfer to China (Taiwan and Macao) of fugitives and criminal suspects.

Students, lawyers, entrepreneurs fear that the law does not guarantee those accused basic human rights, given the dependence of Chinese courts on the Party. In addition, they fear that this law will curb the rights of speech and assembly in Hong Kong, given that Beijing could demand the transfer of dissidents and non-aligned people.

Yesterday's demonstrations followed on from one held Sunday, June 9, which was attended by over a million people. Despite this mass demonstration, the government had decided to continue the discussion in parliament to approve the law. The head of the executive, Carrie Lam is determined to reach a result. Yesterday, in a video message she defended her position and accused the youth of having organized a "revolt".

In reality, most of yesterday's (and 9 June) protesters were peaceful. But they were willing to start a indefinite new sit-in, like in 2014 with Occupy Central, equipping themselves with food, glasses, umbrellas, drinking water to defend themselves from tear gas and water cannons of the police. But there were also groups that accumulated bricks and stones.

In the evening some groups tried to join the Legco and the police tried to stop them with sticks and tear gas, often fired into the melee.

At least 72 people, aged 15 to 66, were injured; two of them are in serious condition. According to some observers, last night's episode is the most violent episode in the territory in recent decades.

Yesterday evening, the diocese of Hong Kong issued another statement – following one from the previous day - in which it asks the government and protesters to "exercise moderation" and find solutions through "peaceful and rational channels".

Card Joseph Zen, bishop emeritus of Hong Kong, and Msgr. Joseph Ha, auxiliary bishop, celebrated Mass, the first at noon, the second in the evening, supporting the requests of the young and praying for peace in the territory.

Geng Shuang, spokesman for the Chinese Ministry of Foreign Affairs, stated " China strongly opposes the irresponsible and wrong remarks made by certain individuals in the US " on the extradition law. He responded that no country, organisation or person had the right to interfere with China’s domestic affairs.
Full Text Source: AsiaNewsIT
See also: https://www.cnn.com/2019/06/08/asia/hong-kong-extradition-bill-protest-intl/index.html
Posted by Jesus Caritas Est at 10:02 AM