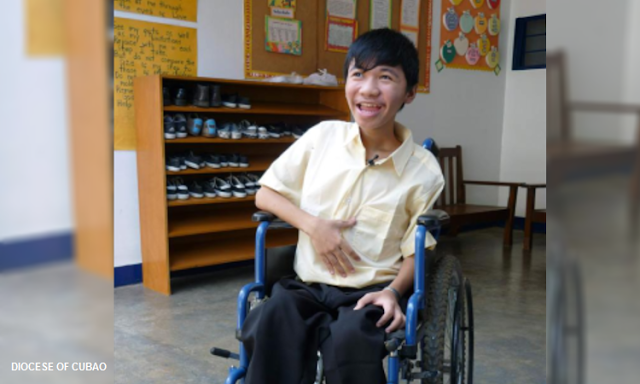 Cubao: Darwin Ramos, who died at 17 due to myopathy, is a "Servant of God"
Pope Francis gives the green light to the process of beatification and canonization of the former street child. The documentation for the cause will be collected by the French Dominican Fr. Thomas de Gabory. Mons. Ongtioco: "Darwin is an example of holiness". Born in 1994, he discovered the Catholic faith in 2006. Since then, the disease has become his "mission".

Manila (AsiaNews) - Pope Francis declared "Servant of God" Darwin Ramos (photo), a Filipino street child who died in 2012 due to a serious degenerative disease: the Diocese of Cubao (Manila suffragan) received the green light to start the process of beatification and canonization.

Card Angelo Becciu, prefect of the Congregation for the Causes of Saints, signed the nihil obstat at the start of the cause on March 29th. Following the order, the inquiry for the canonization of Ramos at the Diocesan Court of Cubao will be conducted by the postulator, the French Dominican Fr. Thomas de Gabory. The local bishop, Msgr. Honesto Ongtioco, initiated the process at the request of the Friends of Darwin Ramos Association. " The Vatican has given us the go signal to go deeper in his life how he lived his faith and how he gave witness to Jesus to whom he was very close - the prelate declares to CbcpNews -. Darwin is an example of holiness. Being a street child, afflicted with myopathy, he is closely united with Christ in his suffering and joy ".

Darwin Ramos was born December 17, 1994 in Pasay City. He spent his early years in a slum in Villanueva street. To help the family, Darwin becomes a waste collector on the street, along with his younger sister. Unfortunately the initial symptoms of what will later be diagnosed as Duchenne muscular dystrophy appear. Darwin's muscles weaken. Every morning, his father leaves him at the Libertad station to beg for passers-by.

Darwin Ramos was born on December 17, 1994 in Pasay City (Philippines). He spent his early years with his poor family in a slum on P. Villanueva street. In order to help his family, Darwin became a scavenger (waste picker) in the street, with his younger sister. They spent their day going through garbage to recover plastic waste which they sold. Unfortunately, the initial symptoms of what will later be diagnosed as Duchenne muscular dystrophy appeared. Progressively, Darwin could no longer stand and his muscles weakened. Poverty pushed the family to live on the street. His father was leaving Darwin every morning at the Libertad station to beg from passers-by who were taking pity on the boy

In July 2006, a group of street educators of the ANAK-Tnk Foundation (Tulay ng Kabataan), which was already regularly meeting with Darwin for few days, were able to fetch him in Quezon City. After getting acquainted with them and understanding that they could help, he entered in one of the centers run by the foundation itself to help street children. Today the foundation is led by the French priest Fr. Matthieu Dauchez and takes care of 280 street children in 17 centers; assists 50 children with special needs in three equipped facilities; conducts field programs for 800 children rummaging through the rubbish and 1,300 living in slums.

Discovering the Catholic faith, he wanted to adhere to himself, and on December 23, 2006, he received the Sacrament of Baptism. In December 22, 2007, he received the First Communion and the Sacrament of Confirmation.  Over the years, his physical condition deteriorates progressively. In suffering, the boy developed a profound personal relationship with Christ, to whom he offered his pains. Darwin did not complain: when he spoke about his illness, he did not call it myopathy but "mission".

On 16 September 2012, what his loved ones call Darwin's "Passion Week" began. His condition suddenly worsened: Darwin felt pain while breathing and was then led to hospital. Even in these moments of great suffering and despite the fact that his hour was about to come, he continued to maintain a friendly attitude, thanking everyone for the services that were being lent to him. Thursday, September 20, 2012, Darwin experienced a spiritual battle. He said: “I am fighting against the devil.” Friday, Darwin looked peaceful and had a big smile. He thanked those who had cared for him and expressed his joy in the hope of soon meeting the Lord by writing “A huge thank you” and “I am very happy.” Saturday, Darwin entered into a great silence while remaining conscious.  The Servant of God died at the Philippine Children's Medical Center (PCMC) in Quezon City at PCMC, Sunday 23 September 2012.
FULL TEXT Source Share from Asia News IT
********************************

DONATE Now to Catholic News World, a Mission, which brings the Gospel to over 200 Countries World Wide! Easy Just Click the LINK below!
If you do not support Christian media who will?
Every little bit helps - as a Donor you and your Family will be added to our Church Prayers - You can add your prayer intention on the Donation site "Donor Wall":
https://donorbox.org/support-catholic-news-world-we-need-
Posted by Jesus Caritas Est at 10:28 AM