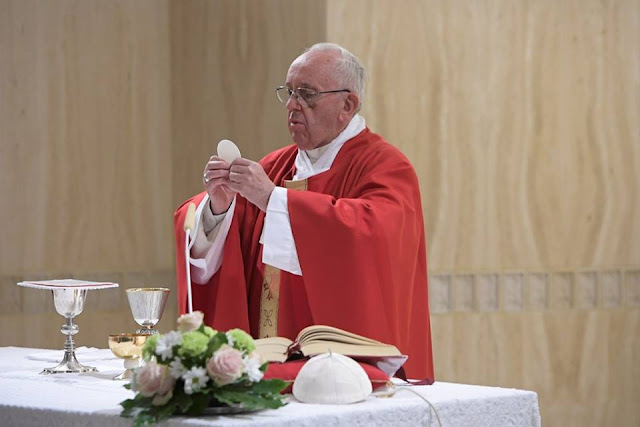 Pope at Mass: ‘Serve others freely, as God freely loves you’
In his homily at Mass in the Casa Santa Marta, Pope Francis reminds us that our relationship with God is completely gratuitous and requires only that we open our hearts to His grace.
By Devin Watkins
“Give freely that which you have received freely,” Pope Francis said at Mass on Tuesday morning.

Focusing his remarks on the Christian’s relationship with God, the Pope noted that we are called to serve and love our brothers and sisters in the same way that God has done with us.

Vocation to serve, not to make use of others
Taking his cue from the day’s Gospel (Mt 10:7-13) in which Jesus commissions the disciples to go out on mission, Pope Francis said Christians cannot remain stationary, since our way of life impels us to “hit the road, always”.

He said Jesus has already given us our mission: “As you go, make this proclamation: 'The kingdom of heaven is at hand.' Cure the sick, raise the dead, cleanse lepers, drive out demons.”

“Christian life is for service. It saddens us to find Christians who at the beginning of their conversion, or awareness of being Christian, serve and are open to serve the people of God, but who later end up making use of the people of God. This causes much harm to God’s people. Our vocation is to ‘serve’, not to ‘make use of’.”

Christian life, said Pope Francis, is lived gratuitously. “Without cost you have received; without cost you are to give,” he said, was how Jesus described the core of salvation.

He said salvation cannot be bought, because God “saves us free of charge” and “requires no payment”.

As God has done with us, so we are to do with others, he said.

“Realize that the Lord is full of gifts for us. He asks just one thing: that our hearts be open. When we say ‘Our Father’ and we pray, we open our heart, allowing this gratuitousness to enter. Often when we need some spiritual grace, we say: ‘Well, now I will fast, do penance, pray a novena…’ Fine, but be careful: this is not done to ‘pay’ or ‘buy’ grace. We do it to open our hearts so that grace might enter. Grace is freely given.”

All God’s gifts, said Pope Francis, are given without cost. And he warned that sometimes “the heart folds in on itself and remains closed”, and it is no longer able to receive “such freely given love”.

We should not bargain with God, he said.

Freely give
Pope Francis then invited Christians, and especially pastors and bishops, to give freely and not try to sell God’s graces.

“It pains the heart,” he said, when we see pastors “that make money off of God’s grace: ‘I can help you, but it will cost this much…’”

“In our spiritual life we always run the risk of slipping up on the question of payment, even when speaking with the Lord, as if we needed to bribe the Lord. No! That is not the correct path… I make a promise, in order to expand my heart to receive what is already there, waiting for us free of charge. This relationship of gratuitousness with God is what will help us to have the same rapport with others, whether it be in Christian witness, Christian service, or the pastoral work of those who guide the people of God. We do so along the way. Christian life means walking. Preach and serve, but do not make use of others. Serve and give freely that which you have received freely. May our life of holiness be permeated by this openness of heart, so that the gratuitousness of God – the graces that He wishes to give us without cost – may enter our hearts.”