Pope Francis tells those at Sea "Only love is capable of radically transforming the relationships..." Full Text 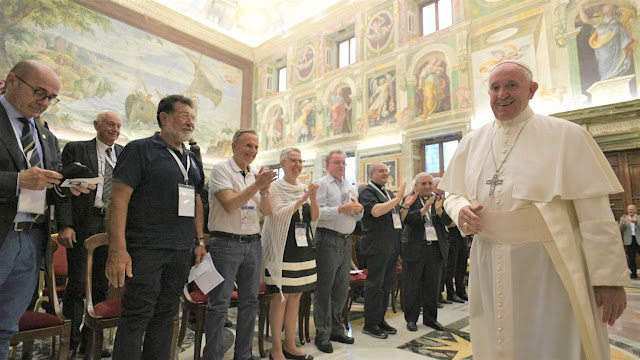 ADDRESS OF HIS HOLINESS POPE FRANCIS
TO PARTICIPANTS IN THE MEETING FOR CHAPLAINS AND VOLUNTEERS
OF THE APOSTLESHIP OF THE SEA
Clementine Hall
Thursday, 27 June 2019

Dear Sisters and Brothers,
I am pleased to receive you, the national directors, chaplains and volunteers of Stella Maris – Apostleship of the Sea, on the occasion of your meeting, which has taken place here in Rome in these days. I thank Cardinal Turkson for his kind words of introduction and presentation. I welcome all of you and I trust that your gathering has been fruitful.
Your meeting has brought together chaplains and volunteers working in European ports at the service of sailors and fishermen, who by their hard work bring us products on which we depend daily. The Stella Maris apostolate is active in over three hundred ports worldwide, offering spiritual and material assistance to great numbers of sailors, fishermen and their often distant families.
Since more than ninety percent of world commerce is transported by ships of various kinds, the dependence of our society on the maritime industry is indisputable. Without sailors, the global economy would come to a standstill; and without fishermen, many parts of the world would starve. I would ask you to convey my esteem and encouragement to the sailors and fishermen whom you meet, many of whom work for lengthy periods of time, thousands of miles away from their native land and their families.
The life of a sailor or fisherman is not only marked by isolation and distance. At times, it is also painfully affected by shameful experiences of abuse and injustice, by the snares of those engaged in human trafficking, and by the extortion of forced labour. At other times, they are not paid their rightful salary or are left behind in distant ports. In addition to threats from nature – storms and hurricanes – they must face human threats, such as piracy or terrorist attacks. They cross the world’s oceans and seas, landing in ports where they are not always welcome.
As chaplains and volunteers of Stella Maris, you have been entrusted with the mission of presence, bringing the Good News of the Lord Jesus to the complex and varied world of seafaring. Your daily visits to the ships enable you to encounter people in concrete situations, at times serene, at other times anxious or even deeply troubled. With compassion and discretion, you give them a chance to pour out their hearts. This is the first and most precious service that you provide, above all to those who have few similar opportunities. Your ministry to sailors and fishermen is above all one of listening to them and to their material and spiritual needs. “Listening helps us to find the right gesture and word which shows that we are more than simply bystanders” (Evangelii Gaudium, 171).
Listening can then lead to action. I encourage you and the chaplains and volunteers of Stella Maris to redouble your efforts to confront issues that are all too often the fruit of human greed. I am thinking of human trafficking, forced labour and violations of the human and labour rights of so many men and women who live and work on the seas. Through your service, you can help restore to these persons their sense of dignity.

In addition, thanks to you, those who are most vulnerable can find hope for a better future. Your efforts can help them not to give up in the face of a life that is precarious and at times marked by exploitation. Your presence in the ports, large and small, is already a sign of God’s fatherhood and the fact that, in his eyes, we are all children, brothers and sisters to one another. Your presence is also a sign of the primordial worth of the human person, prior to and above every other interest, and an incentive for everyone, starting with the poorest, to work for justice and respect for fundamental rights. Let us remember that “men and women who are made new by the love of God are able to change the rules and quality of relationships, transforming even social structures. They are people capable of bringing peace where there is conflict, of building and nurturing fraternal relationships where there is hatred, of seeking justice where there prevails the exploitation of man by man. Only love is capable of radically transforming the relationships that men maintain among themselves” (Compendium of the Social Doctrine of the Church, 4).
Dear brothers and sisters, I urge you to persevere in commitment to your apostolate, following the fine example of all those who have gone before you. Indeed, you are preparing to celebrate next year the centenary of Stella Maris at your Twenty-fifth World Congress in Glasgow, Scotland, where this mission of the Church was born in the hearts and actions of several lay people. This anniversary will be an occasion to remember the past in order to discern the present and to look ahead to the future. Pope Pius XIwanted the Stella Maris apostolate to extend its mission to the oceans and the shores of every continent. May the Holy Spirit, through the intercession of Our Lady, Star of the Sea, renew this pastoral service in accordance with the needs of our time.
Before concluding, I would like to say a word about peace of heart. Many sailors approach or come to see chaplains and priests with problems of conscience that make them suffer greatly, problems that they have never had a chance to bring up in those circumstances, so far from home, far from their native land, and in the situations that we have described. Dialogue with a chaplain may well open up new horizons of hope. So I would say to you: be merciful, be merciful. And to favour that mercy, I grant to all chaplains of sailors the same faculties I have gave to the Missionaries of Mercy. In this way, you will be able to bring peace to so many hearts.
To all of you I cordially impart my Apostolic Blessing, which I ask you to bring to everyone you meet. And please, do not forget to pray for me. Thank you!

Posted by Jesus Caritas Est at 8:01 AM