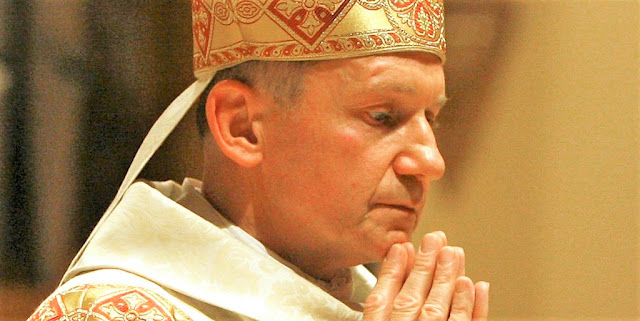 FOR IMMEDIATE RELEASE
June 6, 2019
Bishop Paprocki: Illinois Catholic lawmakers who promoted or voted for extreme abortion legislation are not to receive Communion

Springfield, IL – Due to their leadership roles in promoting the evil of abortion by facilitating the passage of Senate Bill 25 this legislative session and House Bill 40 in 2017, House Speaker Michael Madigan and Senate President John Cullerton have been barred from receiving Holy Communion in the Diocese of Springfield in Illinois under a decree from Bishop Thomas John Paprocki of the Diocese of Springfield in Illinois. In addition, Illinois Catholic lawmakers who voted for either of these abortion bills are not to present themselves to receive Holy Communion.
The decree comes as these legislative leaders have shown obstinate and persistent support of extreme abortion legislation. House Bill 40 legalized taxpayer funding for abortion and Senate Bill 25 makes abortion a fundamental right, allows for the killing of innocent children up to the moment of birth, and requires private insurance to pay for abortion, among other anti-life changes.
“The Eucharist is the most sacred aspect of our Catholic faith,” Bishop Paprocki said. “As sacred Scripture warns, ‘Whoever eats unworthily of the bread and drinks from the Lord’s cup makes himself guilty of profaning the body and of the blood of the Lord.’ To support legislation that treats babies in the womb like property, allowing for their destruction for any reason at any time, is evil. It’s my hope and prayer these lawmakers reconcile themselves to the Church so they can receive Communion.”
Bishop Paprocki’s decree cites Canon 915 that states that those “who obstinately persist in mani­fest grave sin are not to be admitted to Holy Communion.” The decree also cites Canon 916 that states “a person who is conscious of grave sin is not to celebrate Mass or to receive the Body of the Lord without prior sacramental confession unless a grave reason is present and there is no opportunity of confessing; in this case the person is to be mindful of the obligation to make an act of perfect contrition, including the intention of confessing as soon as possible.”
Bishop Paprocki, who is a canon lawyer, consulted with other canon lawyers throughout North America before issuing this decree.
“In view of their gravely immoral action to deprive unborn children legal protection against abortion, it must be said that any Catholic legislator who sponsored, promoted, advocated, or voted for these pro-abortion bills has acted in a seriously sinful manner unfaithful to the 2,000-year-old Christian teaching against abortion and therefore, would place themselves outside of the full communion of the Catholic Church,” Bishop Paprocki said. “Such persons are not to receive Holy Communion until they have celebrated the sacrament of reconciliation and displayed a public conversion of life.”
In accord with Canon 915, Speaker Madigan and Senate President Cullerton are barred from receiving Holy Communion within the Diocese of Springfield of Illinois. By virtue of Canon 916, Catholic lawmakers in the Illinois General Assembly who voted for either or both of these bills are not to present themselves for Holy Communion.
Pope Francis reaffirmed the Catholic Church’s teaching on abortion at his General Audience on Oct. 10, 2018 when he said, “A contradictory approach even permits the termination of human life in the maternal womb, in the name of safeguarding other rights. But how can an action that ends an innocent and defenseless life in its blossoming stage be therapeutic, civilized, or simply human? I ask you: Is it right to ‘do away with’ a human life in order to solve a problem? Is it right to hire a hit man in order to solve a problem? One cannot. It is not right to ‘do away with’ a human being, however small, in order to solve a problem. It is like hiring a hit man to solve a problem.”
In a 2004 Statement on Catholics in Political Life, the Bishops of the United States said, “Failing to protect the lives of innocent and defenseless members of the human race is to sin against justice. Those who formulate law therefore have an obligation in conscience to work toward correcting morally defective laws, lest they be guilty of cooperating in evil and in sinning against the common good.”
“In issuing this decree, I anticipate that some will point out the Church’s own failings with regard to the abuse of children,” Bishop Paprocki said. “The same justifiable anger we feel toward the abuse of innocent children, however, should prompt an outcry of resistance against legalizing the murder of innocent children. The failings of the Church do not change the objective reality that the murder of a defenseless baby is an utterly evil act.
“We also understand many unplanned pregnancies come with fear and difficulty,” Bishop Paprocki said. “It is our obligation, as a society, to be there for these pregnant mothers, help them in any way possible, and empower them to make life affirming decisions. This also includes continued support for the mother and her child after birth. We must acknowledge a child in the womb is not a problem. He or she is a gift from God.
“I want to thank lawmakers who stood up to these barbaric pieces of legislation and voted ‘no,’ and I applaud their courage to speak the truth that the most basic right we should all enjoy, is the right to life,” Bishop Paprocki said.
A letter and the decree from Bishop Paprocki were mailed earlier this week to those Catholic lawmakers who voted for House Bill 40/Senate Bill 25.
Click here to download the decree
FULL TEXT from Diocese of Springfield, Illinois
Posted by Jesus Caritas Est at 8:57 AM

Are priests who rape children to be denied communion?