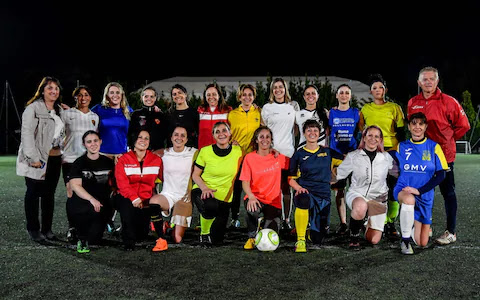 Catholic News Service reports that the members of the Vatican's women's soccer team decided not to play their first foreign match June 22, 2019 when a couple members of the opposing team lifted their shirts to reveal slogans protesting the Catholic Church's opposition to abortion.

But during the playing of the Vatican anthem just before the match was to begin, several members of the Mariahilf team lifted their shirts to show protests painted on their bellies and backs. One said, "My body, my rule."

At the same time, in the stands, someone unfurled a banner reading, "Against homophobia."

"The protest took by surprise the Vatican players who simply expected a celebration of sports," said Vatican News. Along with their coaches, it added, the women "made the difficult decision not to play the match so as to prevent the manipulation of an event they had prepared with joy."

Just over half of the team members are Vatican employees, the others are the wives or daughters of employees. Male Vatican employees have had teams and an intramural tournament for decades; the women formed their team early in the spring to play five-a-side games, but the match in Vienna was to be a regulation game with 11 players on each team.
Edited from Catholic News Service
Posted by Jesus Caritas Est at 10:31 AM