Watch the 1st Mass Notre Dame Cathedral, Paris since the Fire - a Re-dedication by Archbishop Aupetit 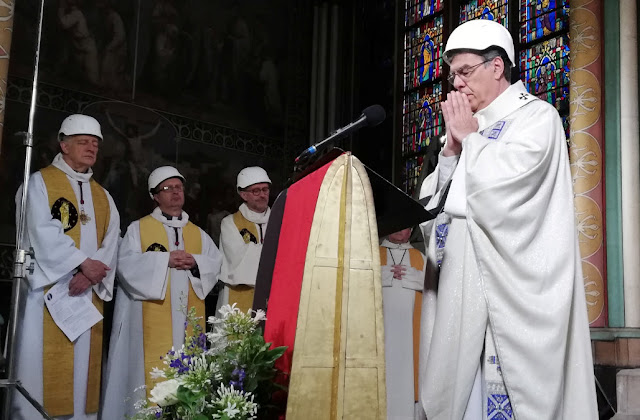 Notre Dame Cathedral, in Paris, France, on Saturday June 15, 2019 held its first mass since a damaging fire two months ago on April 15. Archbishop Michel Aupetit, of Paris, presided over the Mass. French Minister of Culture Franck Riester said that only 9% of the $955 million in donations that had been promised to Notre Dame’s reconstruction had actually been received, according to Agence France-Press. According to reports the billionaires that pledged large monetary support have not provided the money they promised.  The mass was held a day before an annual celebration of the consecration of the church’s altar, known as the feast of the Dedication of Our Lady, and Aupetit prayed before the statue of the Virgin Mary, saying that he was thankful to be there. A small group of about 30 people attended the mass, including the church’s clergy, worshipers, media and construction workers. The mass was also transmitted live on a French Catholic TV station, and dozens of other Catholics attended the service from outside the cathedral, watching on their phones. The small group convened in a chapel behind the large gold-covered cross that was miraculously found intact after the fire. For safety reasons, those attending the mass were asked to wear hard hats inside the church. With information from ABC news
Posted by Jesus Caritas Est at 11:13 AM