Wow over 8,000 Youth gather in Saltzburg for 20th Annual Youth Fest with young from 25 Countries 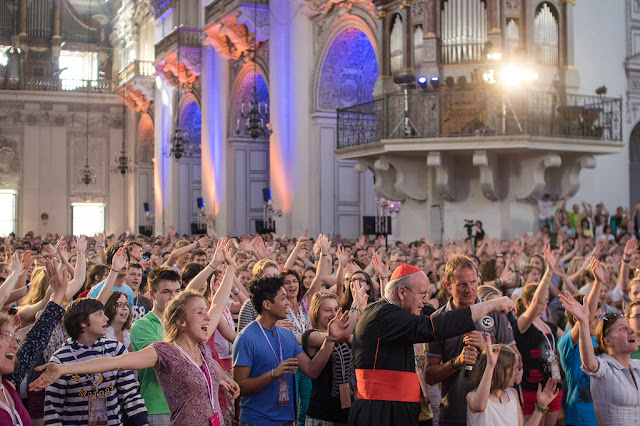 Archbishop Lackner opened 20th edition of the "Feast of Youth" of the Loretto Community - Four days of faith festival is, according to organizers, the largest Catholic youth meeting in Central Europe
More than 8,000 young people from 25 countries gathered on the Pentecost weekend in Salzburg for this year's "Festival of Youth" of the Loretto community. The four-day youth meeting in and around the Salzburg Cathedral, which according to the organizers is the largest Catholic youth meeting in Central Europe, was opened on Friday evening in the presence of Archbishop Franz Lackner, Auxiliary Bishop Hansjörg Hofer and Episcopal Conference Secretary General Peter Schipka. Under the motto "come as you are", a diverse program of services, music, lectures and workshops is offered until Pentecost Monday. The Pentecost of Youth takes place this year for the 20th time.

The organizer Georg Mayr-Melnhof explained the climax of the atmospheric and lively opening evening in the Salzburg Cathedral was the premiere of the musical "be the change" written especially for the Whitsun Congress by 20-year-old Judith Gfrerer. "Each of you is infinitely precious, let yourself be surprised by God, He is a God who loves you and has said yes to you," Archbishop Lackner said in a brief statement to the youth.

Saturday is all about catechesis and workshops at the youth meeting. Sister Hildegard Strittmatter from the Community of the Beatitudes and the head of the Loretto community, Maximilian Oettingen, will hold this year. Even in the morning, Episcopal Conference Secretary General Schipka celebrates a service in the cathedral with the young people.
In the afternoon, around 80 workshops across the whole of Salzburg's Old Town invite you to engage with themes such as discipleship and proclamation, charity, Christianity in the world, and vocation. The highlight on Saturday is the "Evening of Mercy" in the cathedral, where more than 130 priests will provide the sacrament of Confession.

On Sunday, the liturgy of Pentecost, will be led by Archbishop Lackner, begins. In the cathedral also more than 100 young people will receive Confirmation.
More than 400 volunteers work for the organization. (with information from Kath.net)

Here is a video from last year's event:
Posted by Jesus Caritas Est at 12:52 PM