Archdiocese of Rouen in France Commemorates Fr. Jacques Hamel who was Killed during Mass 3 years ago - Homily 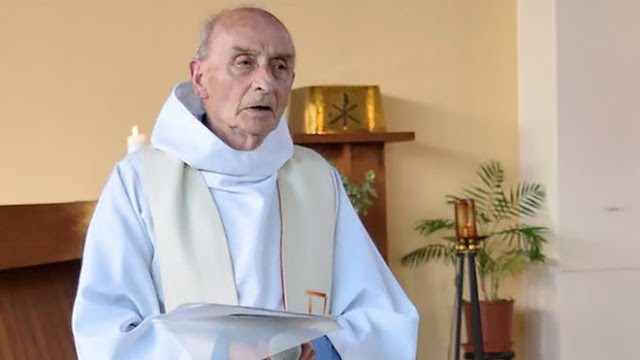 On July 26, 2019 the Archdiocese of Rouen in France held a commemoration Mass in honor of Fr. Jacques Hamel. On Tuesday July 26, 2016, an attack by ISIS has occurred at a Church in France. A Priest was killed in a hostage-taking on  in St Etienne du Rouvray in France.  Two armed men entered a church near Rouen in northern France. The attackers entered during Mass, taking the priest, Fr Jacques Hamel, 84, and four other people hostage. Police surrounded the church and  shots were fired. Both hostage-takers are now dead. President Francois Hollande said the men claimed to be from Islamic State (IS).  Pope Francis expressed the "pain and horror of this absurd violence". One of the hostages, a nun, had been critically wounded.  Police said the attackers had slit the priest's throat with a knife. French Prime Minister Manuel Valls called it a  "barbaric attack".
Full Text Homily by the Archbishop of Rouen - Msgr. Dominique Lebrun:
Brothers and sisters, allow me to greet with affection, from you,
Guy and Janine Coponet, the community of Sisters of St. Vincent de Paul, with Sister
Danièle, Sister Hélène, Sister Huguette.
I greet the family of Jacques, Chantal and
Roseline and their children.
Thank you, Mr Préfet, ladies and gentlemen, the civil and military authorities of
continue to accompany the Catholic community of Saint-Etienne-du-Rouvray.
Happy birthday to you Mr. Mayor as we celebrate today the Saints Joachim and
Anne, parents of the Virgin Mary, grandparents of Jesus.
Brothers and sisters, let's just pause for a moment. Let's open our
hearts to each other, in our paths of faith and life.
"To you it is given to know the mysteries of the kingdom of heaven", says Jesus (Mt.
13, 11).
Amazing word: can we know a mystery? Is a mystery always a
mystery if he is known? Word as amazing to the unbeliever if the believer him
really shares his impression: by faith, he is hardly any more advanced in the
knowledge of the mystery of the Kingdom of Heaven, even more interrogative.
Let's try to understand a little bit.

"To you it is given to know the mysteries of the kingdom of heaven"
Faith is a door that opens. A door that opens on an infinite horizon, a door
which sometimes opens on an abyss. I believe that Jesus is the Father's envoy ... that this son
of Mary, grandson of Joachim and Anne is, at the same time, the eternal son of the Father, the
second person of the Trinity. I believe that the love of the Father and the Son, the Holy Spirit,
is the third person. This communion of love is the greatest mystery of
Kingdom of Heaven. But can I understand that with my intelligence? Can I with
my words describe this? I think in a few minutes, a little bread, a little bit of
wine, our prayer, my priestly ministry will make Jesus present on the altar, as
at each Mass, as this Friday, July 26, 2016. Jesus in communion with his
Father and the Holy Spirit offer us this communion. This is the biggest mystery on the
Earth. But can I with my words explain that?
Brothers and sisters, where are we from the experience of the mysteries of the Kingdom of
heavens ?
The liturgy chooses this passage of Gospel because of the feast of St Anne and St Joachim:
"Happy are your eyes because they see, and your ears because they hear," says
Jesus (Mt 13:16). It is the happiness that one of my sisters and one of my brothers
shared this week by the birth of two new grandchildren, Sophie and
Teo. Photos are circulating to see, maybe videos to hear. Anne and
Joachim did not have photo and video but their eyes, their female ears,
of man, have rejoiced: their daughter is pregnant, their daughter gives life to a small
man.
The faith of Jesus' disciples is not escape, behind clouds or a galaxy. It
penetrates human reality, gives it all its dimension, all its mystery. Yes, faith
is a door, but not a door to escape or imagine the invisible, but a
door to welcome the mystery that comes to us. In fact, the coming of the Son of God in
Jesus does not dismiss the mystery, but adds: "Yes, to you, it is given to know
the mysteries of the Kingdom of Heaven. What you see, you see him loaded with
the infinite love of the Father; what you hear, you hear it in the Word of God,
as the Word of God; what you experience beautiful, good, good is the breath of
God, his Spirit who lives in you.
The Christian mystery is to believe that what we live on this earth belongs to
Kingdom of Heaven. When a Christian goes to the Holy Land, he lets himself be seized by the sky
which reveals to the earth its mystery: human life becomes mystery. Dare I say here
that this is one of the things I envy Muslims: the obligatory pilgrimage!
Of course not in Mecca but in Bethlehem, in Nazareth, in Jerusalem as it was
finally lived Jacques Hamel four years before dying, like you too, his relatives,
have lived it, with a particular emotion.
Life becomes mystery; its reality is discovered. During the investigation of the cause of
Beatification of Father Jacques Hamel, his life was scrutinized, the witnesses were
heard, his homilies were examined. His life has become even more mysterious
than before, richer, more beautiful, more profound!
Which of us is not seized by the mystery of life endowed with infinite love,
particular to the day of birth of a little man? Believers and unbelievers
join in this wonder, this questioning. But now that love
infinite meets quickly, too quickly limit, stupidity, sometimes malice and cruelty.
And the temptation is strong to close the door to see only the surface of life.
So, we risk going on at this level, through revenge or scapegoats.
It is right, however, that our minds rebel. As we rebelled
and we still rebel before the murder of a priest in his church, before any
violent death - we think of Mr. Mamoudou Barry - in front of, I hope, all
violence.
To respond to violence with violence is to cover the mystery of life
full of infinite love with darkness. Ask God for grace not to close the door at
mystery, to welcome him in the joy of an adventure of which we know that it is
fight for peace, in peace, by peace. And this fight, we believe that Jesus in
is the winner. Jacques Hamel gave his life for this, every day, as a result of
Jesus. This is the true mystery that illuminates his life and his death.
 DOMINIQUE LEBRUN
Archbishop of Rouen.
Source: https://rouen.catholique.fr/se-renseigner/agenda/345193-messe-anniversaire-de-lassassinat-pere-jacques-hamel-eglise-saint-etienne-de-saint-etienne-rouvray/
Posted by Jesus Caritas Est at 8:08 PM