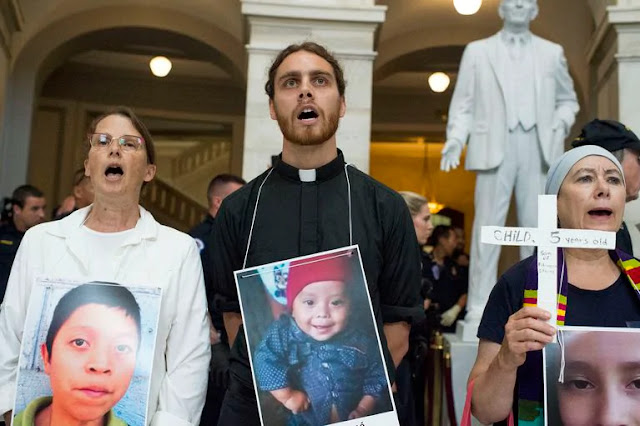 In Washington, DC Police arrested 70 during an immigration protest, including a 90-year-old nun. Protesters are pictured at the Capitol in Washington, D.C., July 18, 2019.

Capitol Police arrested 70 people in the Senate office building Thursday, July 19, 2019 as demonstrators gathered to protest immigration policies.
Sisters of Mercy, Sisters of Bon Secours, Franciscans and others had joined other religious groups and immigration activists for the Catholic Day of Action to oppose White House’s treatment of migrants, as mentioned in a tweet from Sisters of Mercy.

“The United States Capitol Police arrested 70 individuals for unlawfully demonstrating in the rotunda of the Russell Senate Office Building. All were charged with D.C. Code §22-1307, Crowding, Obstructing, or Incommoding,” USCP Communications Director Eva Malecki wrote in an email.

Sister Pat Murphy, 90, a member of the Sisters of Mercy, from Chicago, said she was one of those arrested.

According to ABC News, Murphy has been with Sisters of Mercy for 71 years, and helped start the group, Interfaith Community for Detained Immigrants – a Chicago organization that goes into jails and visits with immigrants who are in detention.


“Images of children kept in deplorable and unsanitary conditions, without access to showers & sleeping on concrete floors without blankets & being detained incommunicado have compelled us to stand in solidarity and say, ‘not in our name!’” Sisters of Mercy tweeted.
Edited from ABC News